Lane Kiffin Was Risky, Not a Bad, Hire

Share All sharing options for: Lane Kiffin Was Risky, Not a Bad, Hire 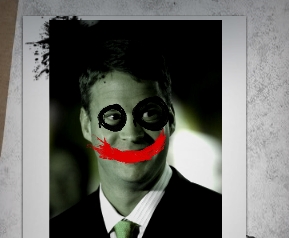 "You know what I've noticed? Nobody panics when things go 'according to plan.' Even if the plan is horrifying! ...nobody panics, because it's all 'part of the plan.'"

I don't know if Lane Kiffin saw The Dark Knight, but judging by its box office haul, I'd say it's likely. I bet he liked the Joker in it, and not just because Heath Ledger did a fantastic job in the role.

You see they're both schemers, even if the Joker denied being one. He schemed to turn people's plans against themselves in order to drive Gotham to madness. Kiffin has also sought to turn someone's plan upside down, but it's not that of any of his rivals. He's turned a plan of the Joker himself on its head.

The Clown Prince of Crime sought to portray careful planning as deft opportunism. Kiffin has done the exact opposite in his time in Knoxville. I don't mean to say that he has no plan; I doubt USC, Oakland, or Tennessee would have hired him if he operated without one. I just don't think it is a meticulous, detail-oriented plan as I've read that Dan Mullen has though.

He strikes me as a big picture kind of guy. I mean, recruiting is his big thing, and yet it is Ed Orgeron who runs those meetings. He also is an offensive guy, but he has an offensive coordinator to call plays for him.

Kiffin, if anything, is someone who jumps on opportunities. If Urban Meyer doesn't call during Nu'Keese Richardson's recruiting visit, he has no barb for Florida. If Lance Thompson doesn't leave Alabama's staff, he has no zinger for Nick Saban. Those were opportunities that presented themselves, and he used them to build his relationships with Vol boosters and to get Tennessee's name and logo in the media more. They contribute to his big picture goals, but they are not things he could have planned back in December when he was hired.

One way that Kiffin is definitely not like the Joker (besides the fact he's not a murderous, psychopathic clown) is that Kiffin has logic in abundance. Ledger's character had no real good logic behind his motives. He, as Alfred suspected, just wanted to watch the world burn.

Kiffin meanwhile takes things out to their logical ends. If football really is more about the Jimmys and the Joes instead of Xs and Os, then throw everything you've got into recruiting. Since your rivals hate you, don't worry about making them mad because they were never going to like you anyway. If the only recourse for secondary violations is a little extra paperwork for your interns, then go ahead and push some boundaries because if you cross them, nothing really bad will actually happen.

You almost always ruffle some feathers when you take things to their logical ends, and it usually is more elegant in theory than in practice. But don't say Kiffin is some sort of crazy man; there really is a deep logic behind his actions.

"Tell your men they work for me now. This is my city."

Many people have asked whether Lane Kiffin was a good hire for Tennessee. This is entirely the wrong question to ask, because it has no answer yet. No one will know the answer for years. Rather, there are two questions to be asked.

First, how risky of a hire is Lane Kiffin? Second, does it fit within the risk profile that Tennessee does (and should) have?

Yes, Kiffin is a risky hire. There's no doubt about it. However, risk is not necessarily a bad thing. You just have to understand it fully if you ever plan on managing it.

He had two years as a co-coordinator at USC, but as he never had the job himself, it's impossible to separate his performance from that of Steve Sarkisian. The two of them did an excellent job, especially with the 2005 offense. Sure, it had eleven guys on it who would be drafted in 2006 and 2007, but no, a trained monkey couldn't do that job. Neither could that PlayStation warrior you know from down the block. Even with boatloads of talent, being an offensive coordinator is no walk in the park.

The 2006 offense wasn't as dynamic after losing so many people off of it, but it still was in the nation's top 20 in both total and scoring offense. After that, Kiffin went off to join the Raiders. Even though the Trojan offenses were effective, the fact that Kiffin never had the job to himself brings more risk than it would if he did have the position alone.

In Oakland, things didn't work out. That much is clear. I've seen many people note that it counts as good experience to have had the job, but the lack of success shouldn't count against him because no one could have succeeded under crazy Uncle Al.

I don't buy that those arguments can be held concurrently. If it was a bad environment, then that means it was not a good experience. More risk. He also did things to antagonize his bosses, and he made questionable decisions such as going for a 76-yard field goal. Those are not the kinds of actions that someone who wants to keep his job would usually make. At some point he too probably realized that long-term success was not likely, and so he took actions that have the appearance of a person trying to get fired. More risk.

If you could summarize Al Davis' opinion of Kiffin in one sentence, it would probably be: "Lane Kiffin is a lying liar who lies all the time." While Davis' judgment has been called into question many times, Kiffin has lied quite publicly twice on the job in Knoxville. First was the phantom rule violation by Meyer, and second was when he claimed to have fired a driver over being late to the airport. More risk.

And if you're going to call Davis' judgment into question, you must also acknowledge that his suspect judgment is the only reason why Kiffin had any head coaching experience on his resume at all before taking over at UT. More risk.

"It's not about money... it's about sending a message."

If you were to summarize Lane Kiffin's major risks in a list format, it would look a lot like this:

Those risks are pretty self-evident, and No. 4 is a problem for any new head coach. However, what few people are giving him credit for is how thoroughly he has worked to counteract that risk:

There is nothing but time that will address risk No. 5 fully, though I guess we might come to find out in the Raiders' suit against Kiffin that Davis made everything up. However he's knocked Nos. 1 through 4 out of the park. Kiffin carried far more risk at his hiring in December than he does now.

So that is about as completely as I can go over the risks associated with Lane Kiffin. That leaves the second question: does the amount he represents fit within the risk profile that Tennessee does and should have? I am not a Tennessee fan and I know nothing of the athletic department's internal dealings, so you Vols fans will have to answer that one for me.

What I do know is that Tennessee didn't have to swing for the fences with this hire. Half of the team (the defense) was perfectly fine during last year's five win season, as it was in 2005 when UT also won five games. All they needed to do was keep John Chavis and bring in someone to resurrect the offense.

By getting his father Monte to come with him, Kiffin basically recreated a Chavis-plus-new-offense scenario anyway. There's no reason to doubt that Monte will deliver excellent defenses year in and year out just like Chavis did. So again: more risk addressed.

"I know the truth: there's no going back. You've changed things... forever."

Risk is not necessarily bad.

Despite what revisionist historians might have you believe, Urban Meyer was a risky hire for Florida (modern spread option hadn't yet been tried in the SEC). Nick Saban had risk when hired by LSU (no experience south of West Virginia so few southeastern recruiting ties). Les Miles was a risky hire for LSU as well (most wins in a season prior to LSU: nine, once). Phillip Fulmer had risk when he took over at Tennessee (Majors' departure was messy and Phil was part of it). Steve Spurrier was a risky hire for Florida (bringing first modern pass-first offense to SEC). All of them were risky, yet all of them ended up national champions.

In just a few short months, Lane Kiffin has drastically changed the image of Tennessee football and energized its fan base. He has assembled an all-star cast of recruiters and brought home one heck of a class on short notice.

Everyone knows that nothing matters without wins on Saturdays. That goes without saying.

What I am saying is this: please everyone, stop calling Lane Kiffin a bad hire. Unless you have a flying DeLorean in your driveway, you can not possible know whether he is or not. Just call him a risky hire, because that is what he is.

Same goes for you Tennessee fans. Don't call him a good hire, because you don't know that either. Don't try to explain away the risks involved with him either.