Share All sharing options for: SEC 2009 // Is Kentucky Relevant?

In the Q&A we did with Truzenzuzex of a A Sea of Blue, he said something that I think gets to the real question when it comes to Kentucky's cupcake-laden bowl success of the last couple of years: When will the Wildcats become relevant?

In reality, if UK is ever to become a consistent and respected mid-pack performer in the SEC, it must be able to compete with South Carolina, Tennessee and Auburn.

The point is a good one. The Big Three in the SEC East (Florida, Tennessee and Georgia) used to be able to count three sure wins on their schedules: South Carolina, Kentucky and Vanderbilt. That's changed over the last four years, as all three teams have become more competitive, but Kentucky pretty quickly fell behind the Gamecocks and is arguably falling behind the Commodores in this department.

And it's not just against the Big Three that the Wildcats have fallen behind. 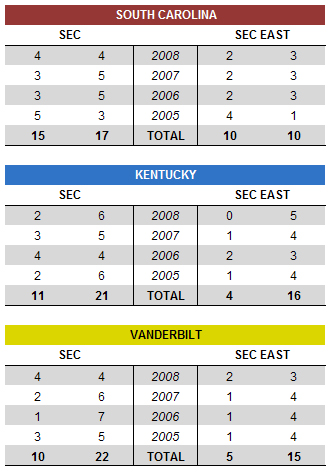 None of these records are anything to write home about, but when it comes to conference games, the trend is clear: South Carolina already has a four-game in the SEC lead over Kentucky over the last four seasons, and Vanderbilt is quickly catching up. Narrow it down to the SEC East, and both the Gamecocks and the Commodores are ahead of the 'Cats.

However they do it, Kentucky has to find a way to pass South Carolina or at least fend off Vanderbilt.

Going to bowl games is an accomplishment. But it's little consolation if you're last in the SEC East.

MONDAY: Kentucky Goes for Four
TUESDAY: The Lexington Ledger; 'Don't B.S. on My Leg and Tell Me It's Raining: A Memoir,' by Rich Brooks
WEDNESDAY: Derek Abney: An Appreciation, The Wildcat Formations
THURSDAY: The Future in Blue
EARLIER TODAY: Cat Brains