Stretch Run: Who Will Win Each of the SEC's Four Pennant Races?

Share All sharing options for: Stretch Run: Who Will Win Each of the SEC's Four Pennant Races?

There's nothing better in baseball than an old-fashioned pennant race. Fortunately, for those of us who follow SEC baseball, we have not one pennant race but four. There are three more traditional pennant races -- for regular-season SEC champion and for each of the division championships. Then there is the race to get into the conference tournament.

Now, with but two weekends left in the SEC season, the races are entering their final laps. A look at where things stand entering today.

SEC EAST
The implosion of Georgia has turned what 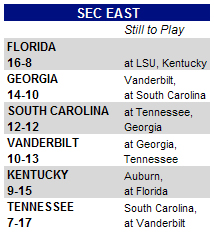 once looked to be a cakewalk into a dogfight -- or, perhaps more appropriately a gatorfight. As Georgia has struggled, Florida has surged, giving the Gators a lead that seems as commanding as the Dawgs' margin once did.

Both teams have a schedule that contains two dangerous series. Florida faces SEC West co-leader LSU in the Bayou and then faces a Wildcat team that could either be deflated or fighting for its postseason life. The same is true of Georgia, which gets current No. 8 seed Vanderbilt at home and division longshot South Carolina (likely to be out of it by then but have a place in Hoover wrapped up) in Columbia.

Florida's magic number is four because it holds the tiebreaker over Georgia. (For the uninitiated, the magic number is the combination of team wins and opponent losses that will clinch a title.) That means Georgia needs to sweep at least one of its two remaining series or see Florida swept at least once. That's a tall order. FAVORITE: FLORIDA

SEC WEST
This has been a bizarre division. LSU 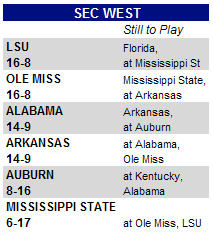 started out the easy favorite to take the crown with a bit of competition from Ole Miss. Then came Arkansas-mania, where it seemed for a time like the Hawgs might blow by 20 SEC wins en route to a conference championship. Now things are back to where they should be -- at least for now -- with LSU and Ole Miss tied for first and the rest of the pack behind.

LSU has a magic number of six in this case, because it holds the tiebreaker over Ole Miss, so the Bengals take the division if they win every game. If they don't -- and while a sweep of Mississippi State should almost be expected, a sweep of Florida looks nearly impossible -- things get dicier. And should both Ole Miss and LSU falter, Alabama or Arkansas would be more than willing to take the prize. Neither is out of it yet, though they face long odds. Both currently have elimination numbers of four, because both lost to LSU this year. Among the two second-place, Arkansas might have slightly better odds, simply because it still gets to play the Rebels. But if they lose to the Tide, the Hogs will practically be out of it anyway. For three of these teams, this weekend could decide their season. I might choose differently is Scott Bittle was less iffy. FAVORITE: LSU

REGULAR SEASON CHAMP
If the first two predictions hold up, of 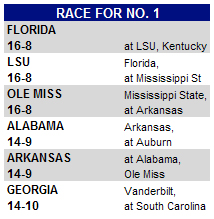 course, this becomes nothing more than a race between LSU and Florida.

For those of you interested in pandemonium, Florida, LSU and Ole Miss all collapsing while Alabama, Arkansas and Georgia all do well could lead to some convoluted situations determining who is the champion and who gets the No. 1 and No. 2 seeds at Hoover. One thing mitigating against that is the fact that most of these teams play at least one of the other teams -- it would be hard, for example, for both Arkansas and Alabama to close out the season strong, since they play each other, and someone is going at least 1-2 in that series if all the games are played.

Of course, Alabama and Arkansas haven't played all their games -- which means things could get tricky if, say, a 19-9 Arkansas team is the winner. But that's not likely to happen.

Between LSU and Florida, though, the Bengals are probably a bit better and probably have a little bit easier schedule, in part because they play Florida and not themselves, but also because Florida plays Kentucky and LSU plays Mississippi State. Say what you want to about Kentucky -- they aren't Mississippi State. FAVORITE: LSU

MAKING HOOVER
Let's take it for granted for a moment that 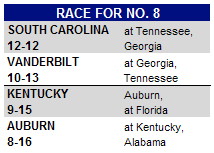 Tennessee and Mississippi State aren't going to the SEC tournament. (Eight teams make it.) If you really want to dispute this, that's what the comments are for. But I see no reason for fans of the Vols or the Western Division Bulldogs to be searching for "Hoover AL" on their favorite hotel booking site.

That essentially leaves four teams fighting for the last two spots in the tournament. Or, really, three; Kentucky and Auburn play each other, and whoever loses two of those three is in bad shape here.

South Carolina and Vanderbilt both have one difficult series -- both, oddly enough, against Georgia -- and one fairly easy series -- both, oddly enough, against Tennessee. The problem for Kentucky and Auburn is that whoever emerges from their series this weekend has to play either Florida or Alabama. Auburn could struggle to keep up with Alabama's bats. And while Kentucky isn't Mississippi State, they also aren't Florida. FAVORITES: SOUTH CAROLINA, VANDERBILT