The Triple Option: How an Old Play Remains New

Share All sharing options for: The Triple Option: How an Old Play Remains New

As the Good Book says, there is nothing new under the sun, and that's especially true in football. Strategies and schemes come and go, but they almost always come back as something else. An easy way to see that is with a staple of football throughout history: the triple option. It's an offense straight from the days when men were men and quarterbacks weren't wilting lotus flowers who had to be protected at all costs.

There are a million different terms for the million different varieties, but the main thing you need to know is dive, draw, and pitch. Those are the three options: a quick hitting handoff (the dive), a quarterback run (the draw), and a lateral or pass to a third player (the pitch).

The veer is often called the "Houston Veer" because it was invented by Bill Yeoman at the University of Houston in 1964.

Here you can see an offensive line with a tight end on the right. The play is run to the side of the tight end, and the first option is the dive with the right running back. If the defense has that covered, the quarterback slides down the line and decides whether to run it himself (the draw) or pitch it out to the other running back who's been trailing him.

This was the first big triple option offense in college, and Houston ran it for 25 years.

This is the formation that WEA spoke of, and it's built for the option. Its roots trace back to the 1950s, before the veer, but it came to prominence in the 1970s.

In this case, there is no tight end and there is a fullback instead. That fullback becomes the dive man instead of one of the running backs.

Who becomes the pitch man depends on which way you're going. If you're going right, the right running back becomes a blocker and the one on the left is the pitch back. The opposite is true when going left.

It's a subtle but significant difference. The tight end in the veer gives away which side the play is going to, whereas the wishbone does not obviously tip off which way it's going. 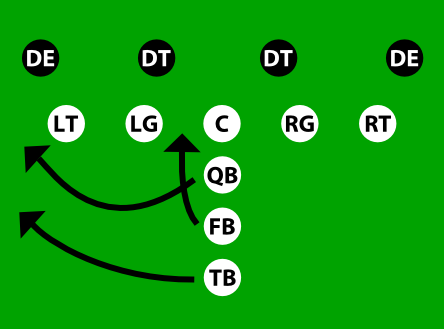 Done by me, poorly

Running the triple option from the I-formation is generally associated with Tom Osborne and his Nebraska teams. They reached their pinnacle in the mid-1990s.

If you run a standard I-formation with a fullback and tailback (as seen above), you're basically running the veer. If you run the Maryland I-form with three backs behind the quarterback, you're kind of running the wishbone.

This is the basic flexbone, but it can have variations. You can do a lot of things in the flexbone, but the triple option is its bread and butter.

Even though its a derivative of the wishbone (just imagine that the two running backs moved to the ends of the line to become the flexbone slotbacks), you're pretty much running the veer from this.

One of the slotbacks goes in motion behind the fullback. When he's aligned with the fullback, the ball is snapped and the veer is run. The other slotback functions as the veer tight end does.

The most prominent flexbone guru in the game today is Georgia Tech's Paul Johnson, but some other schools still do run it as well. 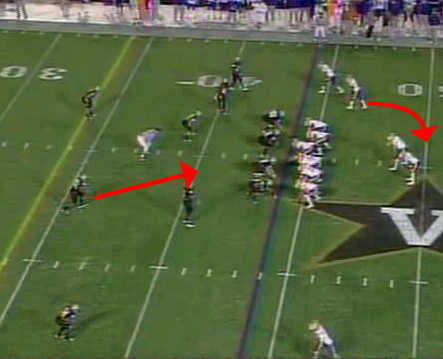 Just ignore the arrow in the defense.

Spread option offenses have been figuring out new ways to do the same old triple option.

One variety here is as done by Florida (broken down in depth here). Don't ask me who invented this originally because I don't know.

Anyway, the quarterback is in the shotgun, a new development compared to the option offenses of yore. The dive back is next to the quarterback, and a receiver in motion becomes the pitch man. This is very similar to the flexbone, but it's not a flexbone formation.

Here is this play in motion. The dive and pitch are covered, so it ends up a quarterback draw. 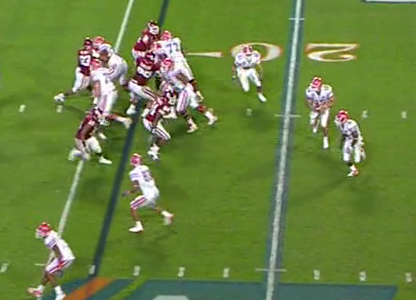 Finally, another variety that Florida runs appears to invert the triple option process, even though it doesn't really. The Gators used it to great effect against Oklahoma in the national title game.

The formation has a running back next to the shutgun quarterback, a tight end on one side of the line, and three receivers on the other. It looks like a standard option run to one side, but the tight end pulls back and peels across the back of the line as you see above.

The dive is still the first option, only just in this case it's executed by a tight end taking a shovel pass instead of a fullback taking a handoff. If the tight end is covered, it then becomes a standard draw/pitch decision on the outside.

The triple option will probably never go away in college football. It's a great way to attack a defense that isn't fully prepared for it, and it can absolutely destroy an inexperienced D.

It has a long and illustrious history in the game, and it's getting reinvented every few years. Whether that's enough for Kyle and WEA or not I don't know, but you can be sure you'll see some triple option throughout the country this fall.