Three More Movies Ed Orgeron Should Be In

Share All sharing options for: Three More Movies Ed Orgeron Should Be In

It got me thinking though: are there some other movies that he should be in? Why stop at him just playing himself? Well, a few ideas came to mind.

The Inevitable Remake of The Waterboy

I know that LSUFreek and EDSBS covered this one recently, but no one on film (until The Blind Side releases) fits Orgeron as well as the Cajun assistant coach from the Adam Sandler classic. Admit it - the first time you heard Orgeron's voice, that's who you thought of.

He would only have to mildly alter his voice to get to the unintelligible swampspeak of the film, and the crew could even save money on equipment since he's loud enough not to require a microphone.

At the rate it's going, Hollywood will get to remaking every movie ever made every year by 2029. Why not give Orgeron the role he was born for?

With the switch to Daniel Craig, the James Bond franchise has been taking itself more and more seriously lately. Never fear though. At some point the pendulum will swing the other way, and when that happens, the filmmakers are going to need some preposterous villains.

It wouldn't take much to come up with a story involving Louisiana (disrupting oil refineries, a plot to reanimate Huey P. Long, etc.), and where there's a Bond story, there's usually an evil caricature.

Enter Ed Orgeron. Just withhold enough Red Bull to get him to talk slower, and you've got a winner. They could even name his henchman Jo-Jo for added fun. There's no way it wouldn't become an instant classic.

Now, I'm afraid that this might end up getting misfiled as a documentary, because I'm pretty sure that's what happens every time Orgeron runs into rival coaches at recruiting stops.

However, throw some sunglasses and a 'stache on him and there's no way he couldn't pull this off. Yeah, that's the ticket: 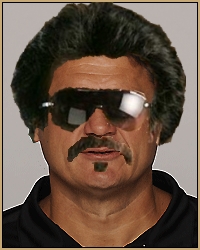