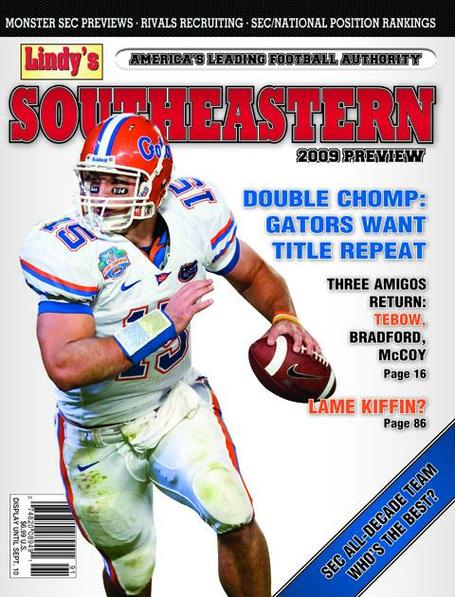 June is next week, so that means it's about time for the preseason magazines to come out. The first one I've seen this year is Lindy's.

Now, we all should probably take it with a bit of salt given that the magazine doesn't measure up too well in Stassen's accuracy rankings, but as it's the first one out let's take a look anyway. For the record, Phil Steele and Athlon are usually the most accurate.

The magazine likes Florida and LSU to play for the conference title. I'll be shocked to see anyone pick someone other than Florida in the East, so let's see why they like the Bayou Bengals. It basically comes down to being impressed by the hire of John Chavis for the defense and the returning offensive personnel of Jordan Jefferson, Charles Scott, Brandon LaFell, and Ciron Black.

Here's the national rankings for the 12 SEC teams:

Seeing Tennessee on the cusp of the rankings was a bit of a surprise to me, but the Lindy's folks seem to believe in Lane Kiffin's energy. The mag also predicts Eric Berry to be defensive player of the year and Bryce Brown to be freshman of the year. It's not all sunshine and unicorns though: warnings about spotty quarterback play appear pretty much everywhere the word "Tennessee" does.

The part on Kentucky pretty much sums up the perils of commiting all of this information to the printed page though. One reason Lindy's is high on Kentucky's defense is a trio of defenders, one of whom is Jeremy Jarmon. An unfortunate mixup with a supplement has left Jarmon suspended for the year, so it leaves one to wonder how much his loss affects their opinion of the 'Cats.

In any event, it's the first one out there so if you're starved for football, just head to your local grocery store's magazine rack. I mean, it's a preseason magazine so you basically know what you're going to get: over a hundred glossy pages of stats, a few feature articles, and a staff of writers' best guesses at the outcomes of sporting events that are three months away.

They're all fairly interchangable, except on accuracy as Stassen tracks. That, and no one pushes the limits of how many words on a page are possible quite like Phil Steele does.