Auburn: Where Offense Is the Question

Share All sharing options for: Auburn: Where Offense Is the Question

One of the many reasons why Gene Chizik was a curious hire for Auburn is the fact that he's a defense guy. Sure he presided over the best defense of the Tommy Tuberville era (2004), but Tuberville went through coordinators in the way that most people go through sneakers.

From Chizik to Gibbs to Muschamp to Rhoads, the Plainsmen could always count on a good defense. The offense largely decided what the team's fate was. This chart tells the story: 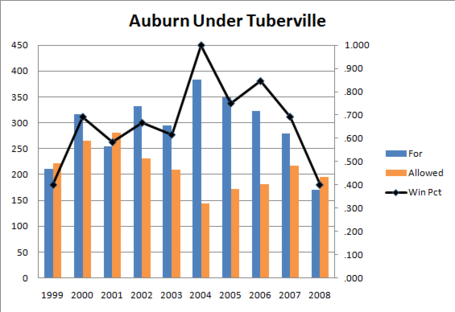 For the first couple of years, team success more or less trended with the defense. However beginning in 2002, when the team was pretty much all Tuberville's players, the team's success trended entirely with offensive production.

A lot of that has to do with the fact that the defense was consistently good from 2003-08. The most they allowed was 217 points in a season (2007), and the 19.6 a game in 2008 was the highest average (each figure net of points given up to I-AA teams). That average may not be championship material, but it's not 4-7 material either.

There's not much more that I can say about the hire of Gus Malzahn that either I or anyone else has said already. He'll have a shot to succeed since he'll have more freedom to run his system than Tony Franklin ever did, but he's stuck with the same conumdrum at under center. Kodi Burns is the best athlete available, but is he the best quarterback available.

I don't envy the Auburn offensive staff as it tries to improve in a division that sports what would appear to be three great defenses in Alabama, Ole Miss, and the new Chavis edition of LSU. If the last six years are any indication though, it'll be almost entirely up to them to get the Tigers back to a bowl.