Share All sharing options for: SEC 2009 // The Loveliest Line-up

This is simply an overview of each of the season's games; predictions come Thursday.

9.5 :: vs. Louisiana Tech
Before you laugh this off as another example of Auburn's selective scheduling of out-of conference foes, remember that the WAC Bulldogs defeated Mississippi State in its season-opener last year. At least the Tigers had the good sense to make it a home game.

9.12 :: vs. Mississippi State
Maybe Auburn can score five points for itself this time, instead of giving two to the Bulldogs. Unless Dan Mullen and Gus Malzahn are magicians, though, expect another low-scoring slogfest. 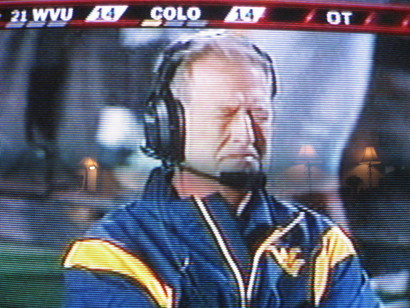 One of the athletic directors will get a break for at least a week.

9.26 :: vs. Ball State
Another tough game that Auburn "lucked into." And, oh, the tangled webs that ran through this one. You will likely recall that the Cardinals reeled off 12 straight wins to begin last year before running into Buffalo in the MAC Championship Game. Buffalo, of course, was coached by Turner Gill. Auburn's failure to hire Gill led to a firestorm of controversy about race and sex and the South. In any case, Ball State is without QB Nate Davis, but still should be a solid MAC team.

10.3 :: at Tennessee
After a month at home, Auburn takes to the road for a clash of contrasts. Boy Wonder has been all over the place, getting his name in the paper and RECRUITING, while Gene Chizik might as well have been in the witness protection program for all we've heard from him. Chizik is, however, one of the few coaches that Boy Wonder hasn't offended. As of this writing, anyway.

10.10 :: at Arkansas
Sure, this game will have a little less sizzle than it had with Tuberville facing off against Bobby Petrino. But a game between two teams trying to dig themselves out of last year's 5-7 finishes might help sort out the SEC West a bit.

10.17 :: vs. Kentucky
This game could decide which of these programs go to a bowl. Both teams will be easily favored in five of their other games with a few toss-ups mixed in. Losing this game could make one or more of those "toss-ups" a "must-win."

10.24 :: at LSU
The Bayou Bengals get a bye week right before they play Auburn. Uh-oh. This is one of the most bizarre rivalries in sports, for those who don't know. Something strange will happen in this game. No telling what it is, but it will be something memorable.

10.31 :: vs. Ole Miss
Two SEC West contenders in a row? Yep. Meanwhile, Auburn is wedged between Arkansas and Northern Arizona on Ole Miss' schedule. Some guys get all the luck.

11.14 :: at Georgia
The Dawgs have won three straight to pull within two wins of evening the all-time series. WARNING: Records can be deceiving in this one.

11.27 :: IRON BOWL vs. Alabama
Motto for this one: "Seven fingers out of eight!" No? Just as well, because Auburn will have trouble defeating Alabama in a game controversially moved to Friday. Then again, like the Georgia game, this is not a match-up where the records matter a lot. Last year's Iron Bowl (Alabama 36, Auburn 0) was the first decided by more than 10 points since 2001.