One way or another, Tennessee's latest secondary violation was going to get widely reported.

Of course, all of the hullabaloo from earlier in the off season means than anything Lane Kiffin says or does is going to get dissected twice over. It doesn't matter that other programs are getting some too without garnering national headlines, because that's just the way news cycle works. The way he earned his latest one though meant that it was always going to be a story.

He, or rather a new staff member, caused the violation by using a recruit's name on Twitter. Even though Kiffin didn't write the tweet, his name was on it and the entire athletics staff isn't allowed to publically name an unsigned recruit anyway.

Kiffin got some air time on yesterday's College Football Live to clear things up, and he said everything that's in the article in relation to the violation. However, host Kevin Negandhi pressed Kiffin for more information about Tennessee's use of Twitter. Kiffin basically said he had no intentions of doing tweets himself, and when asked what UT gets out of the microblogging service, he replied:

"I don't think you get very much, you know, you just don't want to be on a competitive disadvantage to anyone else... I've never really thought it was a big deal or that you gain very much out of it, but other people are doing it so we just try to make sure that we're not at any disadvantage."

Well that actually makes two of us, Lane. Despite being 23 and well versed in the ways of these internets, I honestly don't get what the big fuss over Twitter. I mean it's interesting and not totally without value, but it's really not that revolutionary. And I agree: college coaches are probably not getting much if any recruiting benefits from it.

Kiffin is not alone in his relative apathy towards Twitter. For instance, Urban Meyer said he hated social networking sites like it a little more than a week before his official feed went up. I can't imagine those two are alone in getting someone else to tweet for them.

CFL didn't just leave it at that though. The producers inserted some comments from the Colorado Rockies' Todd Helton, a former quarterback Tennessee quarterback, while on ESPN ex-pat Dan Patrick's radio show: 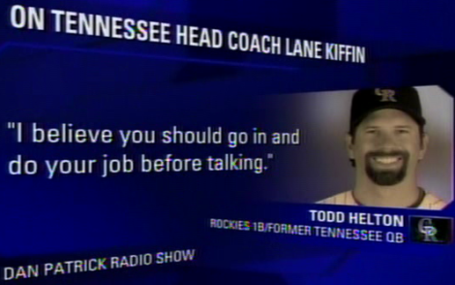 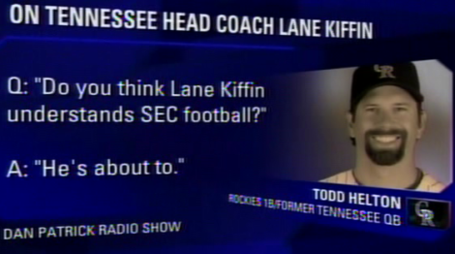 Ouch. Not exactly a ringing endorsement.