Share All sharing options for: The Croominator's Record Laid Bare

Sylvester Croom was hired in a tough spot. Mississippi State's reputation had been sullied off the field, and the quality of play on it suffered. Four years of probation loomed as well, and it's already a program with some historical disadvantages in recruiting.

Being the first black man to be an SEC head coach I'm sure came with its own weight as well.

But while pretty much no one has anything bad to say about Sly Croom the man or the job he did at returning MSU to respectability off the field, he still must be judged by his teams' performance. After all, the job title is "head coach," not "head tutor" or "head disciplinarian."

Croom's defenses were pretty good (though never elite), three times finishing in the top 35 in total defense. His offenses were, to put it bluntly, nothing short of disastrous. For someone who was supposed to be an offensive guy, that's not good.

His biggest problem was trying to run a West Coast Offense in college. The only programs that can make that work are those with elite talent who can handle the complexity in the relatively small amount of practice time. If you try to run a complicated scheme like that without much talent, you will fail. Even after four years of terrible offense, Croom was still swearing by the West Coast before the 2008 season, showing that he's not aware of one definition of insanity.

Even in his lone bowl season, Croom's offense was firmly in the bottom quartile of all the NCAA. One of the reasons he's not coaching in Starkville anymore is that you can't really tell one year from the next.

Here's all five of his seasons in a scrambled order. Can you pick out which is which? 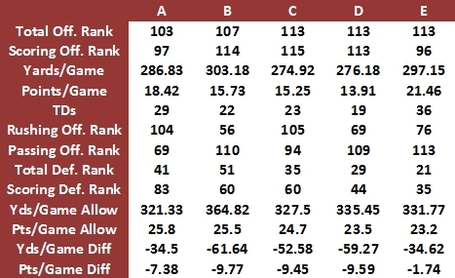 I've brought up the topic of Pythagorean expectation before (see here for details), but basically, it's a technique that tells you how many wins are reasonable given the number of points scored and allowed by a team. For the record, I always throw out I-AA games when calculating this.

That's all well and good, but winning three games instead of two (as happened in 2008) is not really anyone's idea of a banner year. He maxed out his Pythagorean win percentage at .416 in 2007, but he followed it up with a .176 in 2008. That was the second worst figure of his career.

After five full years, Croom had one relative outlier among four otherwise dismal seasons. Anyone who really watched the 2007 team knew it was a bit of a mirage as the team MacGyver'd one win after another. The fact it was outscored and outgained on the year was another red flag.

I don't know if anyone expected Sylvester Croom to come in and compete for SEC titles in his first five seasons. With only one conference title in school history, MIssissippi State doesn't really work that way. However, Bulldog fans have the right to expect to see an offense that's not ranked in the triple digits nationally every year, and that's something Croom couldn't deliver.

It's now Dan Mullen's job to bring the talent level up and get the program back on track. As we saw with Croom, Mullen will likely get plenty of time to prove himself in the job. If the transition works at all like his transition as Florida's offensive coordinator did, it will take until year three to get his offense fully operational.

In any event, what some pessimists feared did not come to pass. True, the SEC's first African-American head coach did not leave his school on rosy terms after a long and successful run. However, he did not exit Starkville due to prejudice, racism, or anything like that. He left because his teams just plain sucked; no more, no less.