SEC 2009 // Mississippi State Looks to Leave the Misery Behind

Share All sharing options for: SEC 2009 // Mississippi State Looks to Leave the Misery Behind 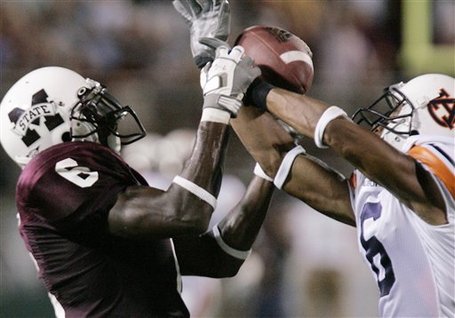 FIRST IN A SERIES :: The Mississippi State 2008 Review

Believe it or not, the time has come to begin previews for next year. We'll be doing one team a week, one or two posts a day, for the next three months to prepare you for the 2009 season. And that's just the team-specific posts. Also on deck: Plenty of overview previews.

These things are roughly in order, from expected to be worst to expected to be first, but not entirely. Some of the teams should be higher, some should probably be lower. But the first team up is obvious: Mississippi State.

Mississippi State fans would just as soon forget about 2008, and who can blame them? The year started off with a debacle, a 22-14 loss to Louisiana Tech, and seemed to get worse from there. High points like defeating then-surprising Vanderbilt 17-14 got lost among the infamy of losing to Auburn 3-2 and getting waxed 45-0 by rival Ole Miss.

But a refresher for non-State fans who might have forgotten about the ineptitude:

--Mississippi State got outscored by an average of 9.5 ppg; the number was 13.4 ppg for SEC games.
--The Bulldogs averaged 276 ypg and 4.2 per play -- almost a yard less per play than opponents.
--Put another way, State was outgained by their opponents by more than 600 yards, despite running 15 more plays.

As with most programs that undergo regime changes, though, the past tells us very little about the present. Certainly, Dan Mullen was brought in because of his offensive coordinator credentials from Florida, where Mullen seemed to take most of the blame when things went wrong and watch the credit go largely to Urban Meyer when things went right.

No, Mullen is unlikely to be any worse than Croom. Mississippi State is about to see how much better he can be.

Last year is the reason Mississippi State made a change. This year is when we begin to find out whether they made the right one.

TODAY: Past as Present
TUESDAY: The Wisdom of Dan Mullen; The 2009 Schedule
WEDNESDAY: The Depth Chart
THURSDAY: Predictions
FRIDAY: Feedback and Conclusions