How to Make Your Own Model Stadium (Without Really Trying)

Share All sharing options for: How to Make Your Own Model Stadium (Without Really Trying)

Not strictly about sports, but whatever: Friday, offseason, etc.

If you're not one to follow photography, you may have never heard of tilt-shift miniature faking. It's a neat effect where you use the strategic use of blurs in Photoshop (or some other graphics editor) to make a picture look like it is a miniature model.

Until recently, you had to have some proficiency in a graphics editor to get it to look right. Thanks to a site I just found, anyone can generate them with ease. It's a cool thing, and it has applications in regards to making stadium shots look cool.

A good place to start is Flickr, unless you have some shots of your own (remember to respect copyright, and doing an advanced search for Creative Commons material is probably best). I found this shot of the Swamp from Flickr user killmylandlord. With a name like that, you know this person has spent time in Gainesville. 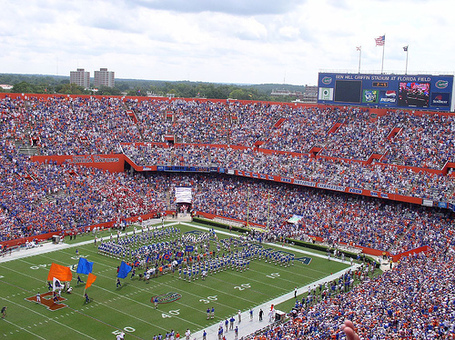 So now, you just take it and put it in the TiltShift Generator, and play around with the settings until you get it right. After about three mintues of messing with the controls, I managed to get this: 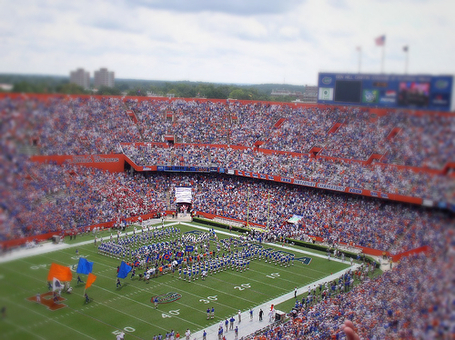 It's not bad for a first try, and I'm sure I could have gotten it better with more work and a higher up shot.

Try to pick a picture without a lot going on in the foreground, and the higher the shot the better. Here is an even better example of what is possible, though the creator didn't use the generator like I did.

If you manage to get a good one, upload it somewhere and post a link in the comments. I love neat tricks like this, and this one's a good one. Now you can try to convince your friends you made an intricate model of your favorite team's stadium, and all you really have to do is move around some sliders. Sounds like a good deal to me.

As a bonus, I'll let you in on a secret. You can use this same generator to do a pretty good old timey effect as I did with this picture I took at last year's Florida-Georgia game. I leave it up to an exercise to you, dear reader, to figure out how, though I will give you the hint that you should probably crank down the saturation. 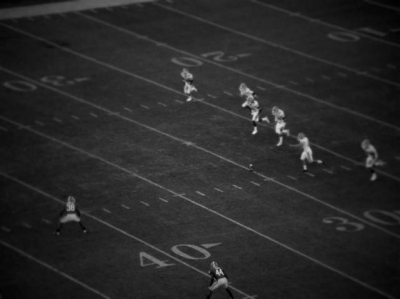 Stay safe, and have a good weekend.