D-Day D-Weekend for Baseball. A huge weekend for SEC baseball begins today. The SEC East could be decided by the end of the day. Simple math says the West will wait until at least Friday. The seedings for Hoover will be determined Saturday, probably.

A few things to know:

--Florida's magic number is one, meaning the first Florida win or Georgia loss gives the Gators the SEC East title.
--LSU's division magic number is three. Any three LSU wins and/or Alabama losses will give the Bengals the SEC West crown. (LSU's magic number vis a vis Ole Miss, in case you're wondering, is two.)
--LSU's conference magic number is two, with Florida the only SEC East team that can catch the Tigers.
--Vanderbilt's magic number to get to Hoover is two, with Kentucky the competition for the 8th spot.
--The recipe and possibilities for final seedings are too complicated to explain here. Suffice it to say that the process ends with a conclave of Mike Slive, the SEC athletics directors and Peter Gammons.

No need for Arkansas to play. Razorbacks Expats has the whole season wrapped up right here. A couple of thoughts:

--I did not realize how brutal Arkansas' conference schedule is this year. They get the usual slate of teams from the West and South Carolina, then mix in Florida and Georgia. You want to say games against titans like Missouri State and Eastern Michigan will balance that out, but the Hogs also have two teams with a faint pulse on the nonconference schedule (Texas A&M, Troy).
--The Gamecock in me has to quibble with the South Carolina choice. But the Gamecocks are a mystery to me this year, so they could lose this game by 50 or win it by 20.

Way too much. I like Kyle Veazey. He's generally one of the better MSM bloggers. But he seems to be getting carried away with this Web 2.0 stuff.

If Twitter were currently operable, I would describe in great detail about how Mississippi State coach Dan Mullen just walked back into Starbucks here in Jackson, Tenn. No movies down the street at the theater that he cares to watch. So he's in a brown comfy chair, a book on ancient military tactics spread on his lap, on the phone with someone.

For the love of merciful Heaven, why? What additional detail could we possibly need?

But Mississippi State fans -- it is safe to reactivate your phone on Twitter.

Remider: Tweet with Team Speed Kills. It's a feed for now, but we'll also be using it for other purposes closer to football season.

The Restoration is on hold. Coach Cal is trying to keep expectations low at Kentucky. Ask St. Nick how that worked at Alabama.

"Half of the team is new players who never played a down of college basketball," he said at a news conference Wednesday. "The other half has never played this style."

Meanwhile, Cal wants to turn Kentucky red. Not as in Republican; no, as in RedChina red.

Calipari, who said he had visited China two or three times previously, spoke with school president Lee Todd about recruiting Chinese students to UK. He also said that 15 Chinese coaches will spend a week at UK, and, if Athletics Director Mitch Barnhart approves, one or two Chinese coaches would spend this coming season with the Cats.

The mention of China raised a question about recruiting. That's when Calipari estimated that the country had 1,000 7-footers. 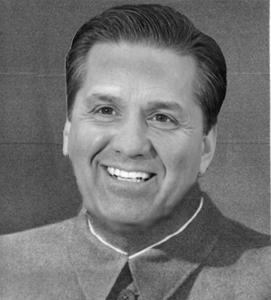 Ya happy? Pahokee Principal Ariel Alejo has pulled both the Gator logo and his e-mail address from his Web page, for reasons one can probably guess. I'm sure he's so much more willing to let Vols coaches on the premises now.

Drip. Drip. Drip. O.J. Mayo talks to investigators. Some of them, anyway.

Memphis Grizzlies guard O.J. Mayo has communicated with the U.S. Attorney's office amid allegations that federal laws may have been violated when Mayo's former advisor gave him money and gifts during his high school and college career, according to a source with knowledge of the case. The source would not elaborate on Mayo's contact with federal authorities. ...

While Mayo has responded to inquiries from law enforcement, for more than a year he has declined requests to set up a meeting with NCAA investigators looking into the allegations.

This is interesting. Why not talk to the NCAA? Certainly it can't be that Mayo thinks the association has some sort of vendetta against Southern Cal. Do any of the legally inclined have any theories? Anyone else? I could speculate here, but I would like more than speculation to go as far out on the limb as I'm thinking.

Wind Sprints. Newly minted Arizona Cardinal Rashad Johnson talks to SB Nation's Revenge of the Birds (HT: Roll Bama Roll) ... 6-foot-4, 300 pound football players should not try to dance. A backflip really ought to be out of the question. Glad to hear the kid's doing okay ... Tennessee wants Robert Marve. Because they don't have enough mediocre quarterbacks, I suppose ...