2008 SEC Rushing by the NFL Metric

Share All sharing options for: 2008 SEC Rushing by the NFL Metric

Earlier this off season I took a look on my personal blog at how college football's passing efficiency and the NFL's passer rating compare. I worked out what the pro guys scored on the college metric and how college's top performers scored on the NFL metric.

Well, after seeing Tomahawk Nation's interesting piece on how FSU's run defense wasn't as great as many fans seem to think it was, I've decided to do the same thing for rushing.

In the college game, sacks are counted as rushes and the lost yardage is subtracted from rushing yarage totals. However, many people (including the NFL's statisticians) don't think that makes sense. The pro league takes lost yardage due to sacks away from team passing yards instead because they were technically lost on passing plays. The fact that the quarterback wasn't able to get the ball away doesn't change the intent of the play.

With that in mind, I present rushing offense and defense in the SEC by the NFL's metric. In other words, this is all pure rushing plays with no sacks counted. 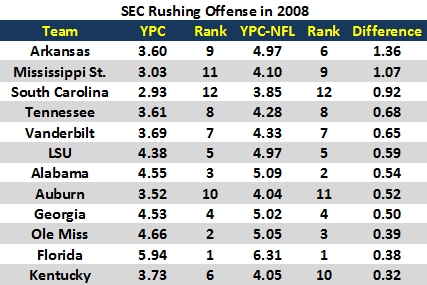 The adjustment was not more significant for any other team than the Arkansas Razorbacks. They were transitioning from Houston Nutt's run-first offense to Bobby Petrino's pass-first scheme, and one result was many bad sacks. They improve from the bottom third of the conference to the top half in yards per carry.

Mississippi State is the other team that improved by more than a yard per game, and the Bulldogs accordingly jumped a couple spots in the rankings. Unfortunately for both them and South Carolina, the third large jumper, they still ended up in the bottom third of the rankings. Even with sacks taken out, they still weren't very good at running the ball.

Down at the other end of the spectrum, Kentucky barely improved but ended up falling four spots in the rankings. The main reason is that UK both allowed the fewest sacks in the league and the fewest yards lost due to sacks. For all the trouble that Rich Brooks' squad had at moving the ball, they only allowed a single sack per game.

Overall, only Arkansas, Mississippi State, and Kentucky saw significant movement within the conference rankings. Despite that fact, you can see that adjusting for sacks caused an uptick of at least half a yard per carry for 75% of the conference. I would consider that fairly significant. 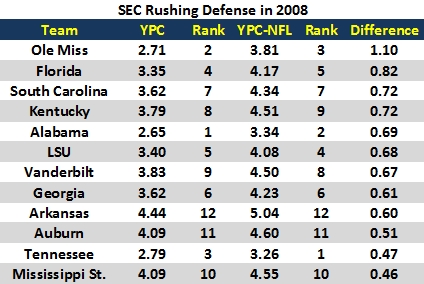 Taking out sacks makes everyone's rush defense worsen to some degree since they are, by definition, tackles for loss.

It comes as no surprise then that the dominant pass rushing teams of the conference, Ole Miss and Florida, ended up topping this list. They finished No. 1 and 2 in the league in sacks, and Kentucky and South Carolina rounded out the top four. The Wildcats and Gamecocks appropriately round out the top four of this list too.

There are no big jumps in the rankings this time, with only one team moving more than a single spot. That would be Tennessee jumping from No. 3 to No. 1. That move is a double-edged sword: it's a testament to the run stopping power of John Chavis' final defense in Knoxville, but also a byproduct of finishing next to last in yards per sack.

No one remained under three yards per carry allowed after adjustment, and Arkansas even went a bit over five yards per carry. It's fun to look at the rushing defense stats and imagine that most of our defenses are run stopping monsters, but that's unfortunately not as much the case as we'd like when sacks are factored out.