Share All sharing options for: Team of the Year 2008-09: Ole Miss Rebels

EDITOR'S NOTE: The long-awaited final installment of the Year in Review series.

Sometimes, the most important team in a year isn't the one that wins the championship. Sometimes, a seemingly middling (or worse) team ends up altering the story of a season.

Consider Ole Miss. Banished from any serious consideration for a New Years' Day Bowl after a 3-4 start, their win at Florida seemed as if it would mark the high point of the Rebels' season. And perhaps it still did. In that win, Ole Miss helped undermine our assumptions about 2008 -- Alabama would defeat Georgia later that evening. And it was the first sign that, by the end of the year, Ole Miss would be a very good team indeed.

For embodying the inconsistency and ultimate greatness that was the 2008 SEC season, for sparking the debate that fueled conference discussions for weeks and for giving the SEC a critical win against the Big XII, Ole Miss is the 2008 Team Speed Kills Team of the Year.

When you talk about the Rebels last season, it's hard to miss the central storyline: A turnaround that took Ole Miss from a contender for the worst team in the SEC to likely the third-best team in the conference by the end of the year.

Part of Ole Miss' remarkable revival was QB Jevan Snead, whose so-so performance against Florida foreshadowed a late-season Renaissance. In fact, through the Florida game, the fifth of the season, Snead completed more than 50 percent of his passes against just one FBS team (Wake Forest, in a loss) and an FCS team (Samford, in a win).

That kind of inconsistency would plague teams, and quarterbacks, all year long. It made it impossible to determine who was in the race for a conference crown (Georgia? LSU? Vanderbilt?!?) and who was fighting for bowl eligibility (Auburn? Tennessee? Vanderbilt?!?)

While Snead put things together, the defensive line became one of the toughest in the league, shutting down the run better than almost any other team in the SEC -- or in the country.

Masterminding it all for the Rebels was the quirky if not bizarre Houston Nutt, as colorful as ever. And don't forget Michael Oher, the rags-to-riches left tackle who was the subject of a New York Times bestseller.

More importantly, though, Ole Miss seemed to be involved in practically every SEC storyline of the 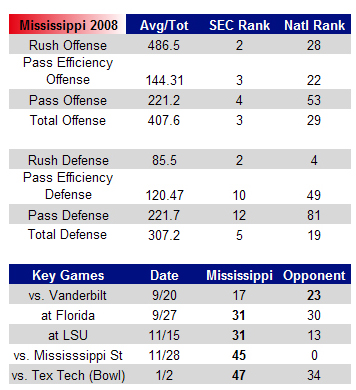 year. A solid argument can be made that the Rebels' 31-30 defeat of Florida didn't matter much in the end, but only with 20-20 hindsight. During the season, it contributed to a raging debate over whether Alabama or Florida was the best team in the conference, an argument that wasn't conclusively settled until the Gators defeated the Tide in the SEC Championship. Whatever their actual impact, Tebow's tears preceded an eight-game run during which the Gators defeated every team they faced by at least four touchdowns.

And it was, in part, because of Ole Miss' turnover-fueled loss to Vanderbilt that the Commodores went to a bowl game for the first time in 26 years. Of Vanderbilt's 23 points, 13 came off turnovers, including a Dexter McCluster fumble at the Vanderbilt 2 with less than three minutes left as McCluster went for what would have been the go-ahead touchdown. Without that win, Vanderbilt stays home for the holidays.

Finally, as the season wound down and the punditry and college football at large debated whether the SEC or the Big XII was the better conference, Ole Miss came from behind for a resounding victory over Texas Tech, becoming only the third team in 2008 to hold QB Graham Harrell to a completion rate (62.1 percent) of less than 64 percent and a passer rating (130.65) of less than 140. (The other two, in both cases, were Oklahoma and -- no, I'm serious about this -- Nevada, which actually held Harrell to season-lows of 41.3 percent and a 94.02 rating.) Paired with Florida's win over Oklahoma, the SEC at least ended the season with a case that its claim to conference superiority was still strong.

The Rebels might not have been the conference's best team in 2008, but they were the most important. For Mississippi and SEC fans alike, it a season and a team that will not soon be forgotten.