On the Topic of Conference Championship Games

Share All sharing options for: On the Topic of Conference Championship Games

The topic of conference championship games came up again last week with Joe Paterno advocating for one in the Big Ten and Jim Delany shooting that down.

The SEC kicked off the conference title game tradition in 1992, and in many ways, the conference is uniquely suited to having one. It has a ruling class but not one or two kings, so such a game makes sense quite often. It also is a geographically a clump with a major city (Atlanta) at the approximate center. Starting in Birmingham wasn’t a bad idea, but putting its permanent home in the ATL was a winning move.

Finally, it collectively has the largest and most passionate fan base in college football. If they played the game in San Francisco every year it would still sell out regularly. The top schools have lots of fans everywhere, and they are willing to travel a great distance to see their favored sons play.

So, the SEC has the motivation, location, fans, and finances to pull a conference title game off. Not everyone else does it quite so well though.

The Big 12 is the closest thing college football has to another SEC. It is almost like a spiritual brother to our fair league in the way its fans are about as fervent and numerous.

It is no surprise then that not long after the implosion of the old SWC, the Big 8 banded together with four of the refugees to form the Big 12. It followed the plan of the SEC by forming geographical divisions a making a championship game, and for a while, the title bout worked as beautifully as the SEC game did.

The Big 12 game though has fallen off some in recent years, not always selling the game out. One problem was that after the near-simultaneous falls of Nebraska, Colorado, and Kansas State, the conference has been dominated by South divisional foes Oklahoma and Texas. In addition, the conference is so spread out north and south that the game has been moved around quite a bit.

There is no obvious site like Atlanta for the SEC, though Kansas City is close. In fact, KC is the most common host for the game. Apparently though, some of the folks in Texas object to the idea of having it there full time as it has frequently been played in the Lone Star State and will come to the Dallas Cowboys' new space palace this fall.

The ACC had some time to observe the SEC and Big 12, and it appears to have been enamored with the windfall of the SEC game but wary of the problems with the Big 12 game.

Someone (or more likely, a lot of someones) in the ACC office must have been convinced that FSU and Miami would end up ruling the conference as OU and Texas do in the Big 12. So, they invented seemingly random divisions, taking the names Atlantic and Coastal, in order to keep them separate and set them up for the title game (since geographic divisions would keep them together). The conference also decided to play the game in the state of Florida.

Well, those schools have combined to appear in the game exactly once in four years. Oops. The result has been embarrassingly low attendance in most of the contests. Beyond that, there are two major issues with the conference having a championship game.

The first problem is that the ACC is a basketball league with only four full-on football schools (FSU, Miami, Virginia Tech, and Clemson). Second, the game should have been in Charlotte all along since it’s a central location with an NFL stadium. Putting it in Florida is a gamble that only works out if two particular schools are in the game. Putting it in Charlotte makes it in the same state or one state away from eight schools (and it’s not that far off from Maryland).

The game will end up in Charlotte in a couple years, but given that the city knows the ACC is not a football conference, it refuses to overpay for the rights to host the game. As a result, there’s no guarantee that it will stay there.

Now is where the question of the Big Ten comes in.

First of all, no championship needs to be played in order to satisfy Joe Paterno’s complaint about the conference being off the airwaves for the last two weeks of the season. All the conference has to do is play regular season games through the first weekend of December as the Pac-10 and WAC do.

Anyway, Delany is more concerned than anything else with preserving, promoting, and extending the Big Ten brand. Expanding the conference just to get a conference title game would probably require a name change, as "12" doesn’t hide in the negative space of a logo quite as well as an "11" does. Only one school could make up for that – Notre Dame – and that school isn’t willing to join up soon. 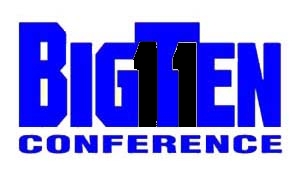 A 12 just wouldn't hide so well in there. Note: I still run into people who don't notice the 11 in that logo. Really.

Plus, the Big Ten has to consider the fact that one game overshadows the rest. The SEC doesn’t have that problem with so many great and historical rivalries (the Iron Bowl, the Cocktail Party, the Third Saturday in October, the Egg Bowl, etc.). The Big Ten isn’t short on rivalries, and it even has plenty of weird rivalry trophies to go along with them. However, nothing is bigger than Ohio State-Michigan.

Delany knows that and he won’t want to dilute the value of that game. Therefore, you have two underwhelming choices when it comes to making divisions:

1. Put them in the same division

If you put them in the same division, the game preserves its meaning since the loser probably won’t win the divisional crown. However, that would also mean the conference title would never be decided officially in the biggest game of the year. That’s a problem

2. Put them in opposite divisions

If you put them in opposite divisions, then they can meet in the championship game to play for the title. Great, right? Except, that means the regular season game isn’t as meaningful because after one loses it, it could theoretically go ahead and win the conference anyway the very next week in a rematch. That’s a problem too.

That is why Delany contended that an expansion would not necessarily result in a conference championship game. It may not make sense for the conference, and there is no rule that you must play a title game if you have 12 or more teams.

This is usually the point where someone chimes in saying that it’s not fair that some conferences play title games and others don’t. As I just said though, 12-team conferences are not required to play one. No one is holding a gun to their heads forcing them to hold that event. In other words, that’s a bogus argument. If you think that a conference title game is unfair, then the conferences that hold them have dug their own holes on that front.

I am glad the SEC holds a championship game. I personally have not been, though I want to someday, but everyone I know that has been says it’s great. Plus, it’s an exciting end to an exciting regular season. However, it may not be for everyone, and yes, that includes the Big Ten. I’m no fan of Jim Delany whatsoever, but he’s probably right on this one.