The 4-Stack Formation and Who Should Run It

Share All sharing options for: The 4-Stack Formation and Who Should Run It

I am a connoisseur of innovations in offense, and I'm always interested in learning about new things. I'm not so big on things that require loopholes to work, but if it's within both the letter and spirit of the rulebook, let 'er rip, I say.

As a result, I am a regular reader of the blog Smart Football. If it's not in your RSS collection by now, it should be.

Recently, Chris (who runs the site) did a feature article on the offense that Mississippi Valley State ran when Jerry Rice was there. The piece was apparently inspired by an old Seattle P-I article on the topic, but Chris highlights and fleshes out the formation that MVSU Head Coach Archie Cooley called the 4-Stack. 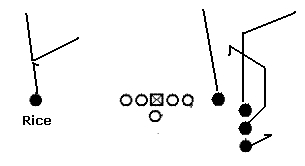 The 4-Stack worked on the principle that no one in I-AA could cover Jerry Rice, and that was certainly true. The Delta Devils would isolate him on one side and have four receivers run confusing routes on the other.

If the defense doubled or tripled up on Rice, the offense would have an advantage on the other side. If they single-covered Rice, he'd burn his man for a big gain and maybe even a touchdown.

The evolution of defense and all-around quality of players in I-A prevents anyone from using this formation extensively. There simply aren't many players that present the same kind of mismatch as Rice was to the I-AA defenders.

Still, it looks like a lot of fun. I'd like to see some SEC teams pull this out once or twice against cupcakes and maybe even the right in-conference foe. Here are my picks.

It seems like few of the super hyped recruits each year actually come in and make immediate impacts. Julio Jones lived up to his hype though, hauling in 58 balls (the next-highest receiver had 16 catches) and being a general menace to defenses.

At 6'4", 210 lbs he's a mismatch for your standard 5'9" or 5'10" corner and can operate well in space. The guy is the real deal and could make this become known as the "Julio Jones formation" to those who don't know its origin.

One problem though: who are the other four guys you're putting out there? The second-highest receiver for Bama was TE Nick Walker, and tied for third was RB Glen Coffee. I guess you can put Colin Peek and Mark Ingram in there, but I have doubts about how good the other guys they can line up would be at making the defense pay for doubling Jones.

For all the attention on Jones, he wasn't even the leading freshman receiver in the conference. Georgia's A.J. Green caught two fewer balls but went for more yards than his counterpart in Tuscaloosa. Green was the playmaking receiver that Georgia has largely lacked in recent years, and he helped Matthew Stafford get his completion percentage above 60% for the first time in his career in 2008.

Like Jones, Green is listed at 6'4" and towers over most corners. He is about as sure handed as they come, and he could cause some real damage out of this set.

Georgia does have a similar problem to Alabama though when it comes to filling out the other four guys. Their landscape at receiver isn't quite as barren as Bama's is, but losing senior Mohammed Massaquoi hurts. Incoming freshman Marlon Brown may help if he's as good as Rivals and Scout say he is, but UGA is also probably looking at including a tight end or running back in the formation.

This would have been a great Percy Harvin formation, and for all of Urban Meyer's encyclopedia knowledge of football, I'm kind of surprised they never tried it even once. Anyway, my pick for the lone man is a bit outside the box, but it's TE Aaron Hernandez.

Meyer has said a couple times this spring that the Gators' two biggest matchup problems according to opposing coaches were Harvin and Hernandez. At 6'3", 255 lbs he is too big for defensive backs to cover, but he's too fast for linebackers to cover. He's tough to bring down in the open field and would be a terror in the space this formation provides.

He was Florida's third-leading receiver last season, and the top two guys are gone now. He's been building great rapport with Tim Tebow this spring and at times looks like the best player on the field. With Florida's seemingly endless supply of receivers and speed backs to make a serious threat on the stack side, why not give it a try?