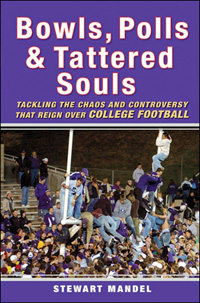 I know I'm a little late to the party with this one, what with the first edition of it being printed nearly two years ago. I do a lot of reading, but little of it is of the paste-and-page variety. Before this past Sunday, I had bought exactly one book since I left college in December of 2007.

Anyway, I figured it was about time I got around to looking into Stewart Mandel's Bowls, Polls, & Tattered Souls. It is a ten chapter affair that attempts to explain some of college football's most contentious issues.

He determined the chapters by looking at what he gets the most mail about for his SI.com mailbags. If you wondered why he seems to promote the book in every mailbag, it's not just because he wants more sales. It's because he covered these topics at length in this book and they come up over and over throughout the year.

The issues tackled are some of the most obvious: the BCS, polls in general, Notre Dame, and the Heisman trophy. He goes into some other good ones as well, such as TV contracts, recruiting web sites, and how the NCAA metes out discipline (or doesn't, as the case may be).

If you're a college football die hard, then not all of it will be that new to you. After all, it attacks the most prevalent issues in the game today. You're bound to have participated in some of the discussions and arguments.

Mandel does provide quite a bit of history as well, though, which is handy if you're like me and are too young to remember anything before the 1990s (insert joke about all Florida fans not remembering anything before the 1990s here). You might be surprised to find out that the AP Poll was not designed to be authoritative but rather was the original midweek filler for newspapers, or that there are fewer people "in charge" of college football than you probably think.

Make no mistake though; this book is pure Stewart Mandel. Paragraphs are finished off with his trademark sarcastic or snarky comments almost as much as they're not. If you're a regular reader of his columns and mailbags, the feel of it will be very familiar.

The book was originally published after the 2006 season, so you'll have to remember that as you read it. Its age is not that distracting as you go through it as only two seasons have transpired since it went to press.

Still, keep that in mind as you read about what a great job Charlie Weis is doing in South Bend or about how no sophomore has won the Heisman. If you grab the paperback edition, it has an afterword that updates each of the chapters in light of the 2007 season.

You may be tempted to automatically skip this book if you believe Mandel hates your team (hint: he doesn't), but at least flip through a few pages at the coffee shop of a bookstore. It touches upon some subjects that are near and dear to this conference, from the possibility of a playoff to the insanity of modern recruiting to Phillip Fulmer's involvement in the Logan Young scandal at Alabama.

I can't put my finger on it, but it feels like there's something missing about the book that keeps it from being in my "indispensable" category. Even so, it's a thorough book that will keep you hooked on it for hours (it took me about four to read it all).

If you're a college football expert, it's a good read. If you're more on the casual side, then it's a great read because it'll answer a lot of questions you'll have about some of the most frustrating aspects of the game we all love.