Clarifying What a "Spread Offense" Entails

Share All sharing options for: Clarifying What a "Spread Offense" Entails

While reading the excellent interview Bruins Nation had with Rick Neuheisel, I came upon the final question of part one. It basically was, "Hey Rick, what do you think of the spread offense?"

Neuheisel ends up giving a fairly long and winding explanation of why he chooses a pro style offense rather than a spread scheme. I'm going to chop it up into mincemeat for a second to illustrate a point:

"The key to the spread offense, and the reason why its successful, is that it adds an extra player.  It diminishes the need for great offensive linemen, because you’ve got a little longer because you are always in the gun...

"The problem at UCLA is that you have to beat the Trojans.  And it’s also the benefit at UCLA, because when you beat them, you’re going to be among the nation’s elite.  So you have to be a physical offense...

"I was the benefactor of a type of spread offense, even though it was an option offense, it’s the same math in terms of the quarterback’s [being] a runner...

"There were some components of the spread offense in what we did last year.  We got into the old wildcat stuff..."

The picture of the spread offense that Neuheisel paints is one that involves a running quarterback, the shotgun as the exclusive setup, an offense that isn't physical, and the wildcat formation.

Basically what he described is the Rich Rodriguez/Urban Meyer style offense (except for the part about the spread not being physical). However, that's not necessarily what a spread offense is.

I know Neuheisel is a bright guy, and I wasn't there when the interview was conducted. Maybe something about the session led him to think of the spread in those terms. However, that's an awfully narrow definition of a very broad concept.

The term "spread" dates back at least to 1952, and I'm sure it's been around longer than that. The spread isn't an offense; it's a formation and a philosophy.

For the record, this is a spread formation: 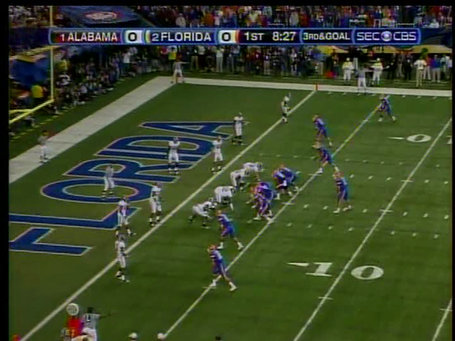 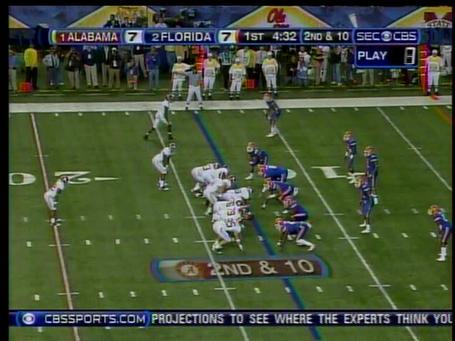 The idea behind a spread-based offense is to make the defense cover the entire field. Contrary to what Neuheisel may have made it sound like, a spread formation is an excellent choice for physical running up the middle. That's because with the defense spread out, there are fewer guys in the middle of the field to try to stop the ball carrier.

That fact is also why many spread teams prefer to have a mobile quarterback. Fewer guys near the line of scrimmage makes for fewer people hanging around to stop a runner behind center. Having a running triggerman is not a requirement though.

For instance, the first neo-spread team in the SEC was Hal Mumme's Kentucky, and we never saw Tim Couch take off and run much. That branch of spread offense is continued today by Mumme's former assistant Mike Leach at Texas Tech. You also have teams like Ohio State's 2006 team which ran a fair bit of spread with Troy Smith rarely participating in designed runs.

The shotgun isn't even a requirement as Neuheisel made it sound like. Sam Bradford operated from under center a fair bit in Oklahoma's spread last season. In addition, Paul Johnson's offense keeps the quarterback under center almost exclusively even though his base flexbone set is is a spread formation.

Finally, the wildcat is a formation and offensive package but it doesn't have to be run from a spread set or spread offense. Not all spread teams use it either.

No two teams run the exact same spread offense, as every coach has his own take on it. It also must be tailored to personnel. If you want details, there's a wealth of information on many spread topics at the blog Smart Football (start here, here, and here).

If I wasn't clear before, let me be so now: I don't think Rick Neuheisel is unaware of all this. He knows far more about offensive football than I do and he could probably explain it a lot better than I can.

It just disappointed me about the way he used "spread" to mean a lot fo specific things when it doesn't necessarily. It's like saying that having a quarterback under center in the I-formation means you're in a pro style offense, except that the heyday of the Nebraska option was largely done from the I.

In short, just remember that there is no one "spread offense." There are as many spread offenses as there are teams that run them, and every one has something that makes it unique.