Do We Need to Reevaluate Dan Mullen?

Share All sharing options for: Do We Need to Reevaluate Dan Mullen? 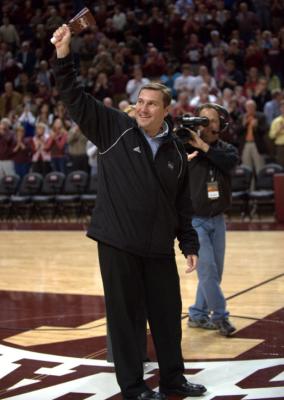 You know things are upside down in Starkville when they use a basketball game to get folks excited about football. No offense, Coach Stansbury.

There is a small but extremely vocal contingent of Florida fans that never liked Dan Mullen.

They thought he didn't know what he was doing in his first two years because the team failed to score 30 points a game.

Never mind the fact that the players were learning a new offense and precious few of the right kind of player were there to run the offense properly. Also, all of the coaches were still learning about the rigors of life in the SEC, the pressures of which led to the infamous "Urban Crier" incident after the 2005 Florida-LSU game.

They thought Mullen didn't know what he was doing in his last two years either because according to them the team could have averaged 50 points a game.

Never mind the fact that the defense was the problem in 2007 and that an offensive player won the Heisman that season. Ignore that entire last year too, what with the 45 points a game and national title; the guy's just riding Urban Meyer's coattails.

No matter what, nothing he did was good enough. Being the offensive coordinator for two SEC titles, two national titles, and two of the top six highest scoring offenses in school history doesn't matter to them. They all wanted him replaced by Meyer's offensive coordinator at Utah, Mike Sanford, despite the fact that Sanford is the head coach at UNLV and isn't going to give that up to be an assistant again.

These kinds of people are the sort that helped lead Steve Spurrier to resign in 2002 in part because he thought that the fans felt 10-2 wasn't good enough. They created what Ron Zook called "the noise in the system" and are part of what Meyer generically calls "the Florida nonsense."

It would be really easy to dismiss them all as permanently unhappy message board creatures, and that's because they mostly are. However, one thing keeps me from wiping them all away entirely.

The early reviews of new UF quarterbacks coach Scot Loeffler are universally positive. Tim Tebow and backup quarterback John Brantley have been raving about him since day one, and some of the receivers have made comments as well. The throws are more accurate, the spirals are tighter, and their arms aren't as tired after practice.

One of the biggest things they've been working on is getting Tebow and Brantley to throw with their whole bodies instead of just their arms.

Now, I'm no quarterbacks coach and I've never played organized football. I did play nearly a decade of Little League baseball though, and I can remember the "don't throw with your arm, pitch with your body" lesson being taught to 12-year-old pitchers back then. I would think that it'd likely be a part of most any aspiring quarterback's education as well, especially in college.

I know it's not a universally taught lesson though. I can remember seeing an instructional video with Randy Johnson and Nolan Ryan, and Johnson said he was just a thrower until Ryan taught him to really pitch. This video was filmed after Johnson made the majors and struck out a lot of guys, so success can be had without using your whole body.

Anyway, it makes me pause and wonder about Mullen when I read that Loeffler is working with the quarterbacks on basic fundamentals like using their legs, footwork, and the proper release point.

There's nothing in Mullen's background that would specifically lead him to be a quarterbacks coach. He was a tight end in college and was nothing but a receivers coach until joining Meyer's Bowling Green staff as the quarterbacks coach. Seeing as how he groomed Josh Harris, Alex Smith, Chris Leak, and Tebow, he did do all right for himself in the role, but Harris, Smith, and Leak have all amounted to nothing in the NFL.

When it comes down to it though, Mississippi State didn't hire Mullen to come in to be a quarterbacks coach. They hired him to be the head coach and revitalize what has been a moribund offense for years.

He started by signing a pretty good recruiting class. It features seven four-star players (according to Rivals), which is one less than MSU had in 2007-08 combined. That's a good start.

He's also a workaholic who knows the ins and outs of one of college football's most effective offenses. No, Tyson Lee and Tyler Russell aren't exactly Chris Leak and Tim Tebow, but no one expects miracles right off the bat in Starkville. Improvement is all they want, and there's a good chance it will come.

Maybe Dan Mullen isn't as good a quarterbacks coach as Scot Loeffler is. Then again, maybe all the improvement Tebow and Brantley are seeing comes from having a dedicated position coach instead of one who is also trying to run the whole offense.

They have Dan Mullen the head coach, not the position coach or coordinator. Only time will tell whether that's good enough in the SEC, but he accomplished more as a coordinator than fellow SEC head coaching hires Mike Shula and Lane Kiffin did as coordinators.

That fact alone probably makes him worthy of a fair shot at a program that needs a boost.