Florida 2008: The Best Gator Team in School History? If Not, Pretty Close

Share All sharing options for: Florida 2008: The Best Gator Team in School History? If Not, Pretty Close

It is, to an extent, a normal question to ask of any championship team, particularly one that wins a title by ruthlessly dismantling every challenger foolhardy enough to take the field.

Was this the best Florida Gators football team ever?

The question is also all but impossible to answer. You can't compare teams from different years with any 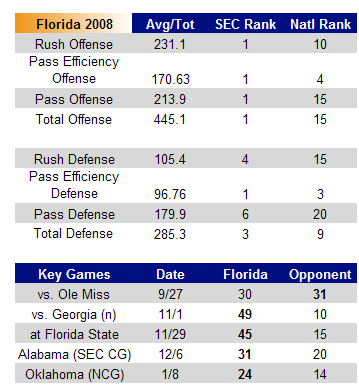 degree of confidence, much less teams from different eras, even if there were some universally agreed upon measure of what constitutes "the best team" in a given year -- which, of course, there isn't.

But let's set that aside for a moment and try to propose a couple of measures that should at least be able to tell if a team was among the best ever. And, since we're talking about Florida here, let's try to tailor those measures to what the Gators have done best for the past two decades: Score a lot more points than the other guys.

Scoring Offense. We'll throw this one in here because it has been the backbone of Florida's greatness over the last 20 years. Yes, the defenses are almost all underrated, but the reason for that is because the offenses were so great.

Margin of Victory. Again, it's not a perfect measure, but it's one of the most reliable indicators of how much better a given team is compared to its peers. You can have one or two misleading scores in a season, but the law of averages says things should pretty much even out.

Championships. In all sports, on some level, whether a team is considered great is decided by how championships it can claim, whether a conference crown or a national title or both.

Using those measures, it's pretty easy to argue that the 2008 edition of the Gators was, indeed, one of the best Florida teams of all time. 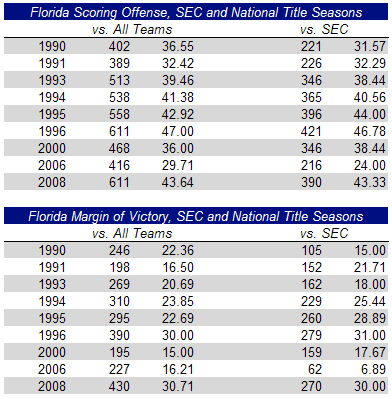 *Team was denied 1990 championship because of NCAA sanctions.

When it comes to scoring offense, this team could hold its own with the best championship winner in Steve Spurrier's tenure. And even if it took an extra game to get to 611, the 43.64 ppg average was second most among Florida's championship caliber teams. It ranked only 3rd, though, in SEC ppg.

Take a look at the margin of victory, though. No Spurrier team that won a championship ever defeated all its opponents by an equal margin, though the 1996 national title winners came close. And only that 1996 team won SEC games by a larger average margin.

Now, let's go a step further. If you take the margin of victory and divide it by points scored, you can get a rough idea of how many points Florida (or any other team) didn't "need" in order to win a game. The methodology is just a touch off -- you need at least one more point than the other guys for a victory, and MOV counts that single point as well -- but it gives us an idea of just how wide those margins of victory actually are.

Using our new formula, for example, a team that defeated an opponent by an average of 63-3 would do better than a team that outscored the other side 30-3 on average. But both would end up with a higher value than a team that won its average game 80-20. So it captures, on some level, the quality of a team's offense and defense.

By this measure, 2008 Florida comes out better than any other championship winning Gator team -- across the board. Simply put, almost 70 percent of Florida's points -- and almost 69 percent in SEC games -- were completely unnecessary. 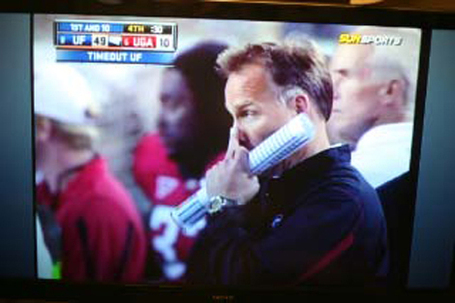 Unnecessary timeouts are another matter.

No, you can't say with any degree of certainty that the 2008 Florida team was the best in school history. But when you consider that the 2008 Gators won an SEC championship, a national title and, on average, could have stopped scoring early in the second quarter to do so, you'd be hard-pressed to find a better candidate.