Comcast + Interwebs = MASSIVE FAIL. Apologies for not posting last night. As I was going through my reader, picking the stories for Sprints, I broke Google. Actually, that's what I hoped had happened, because that would be an awesome story to tell my grandchildren. Actually, the Internet service went down. And so, dear reader, to the news that greets us this day. 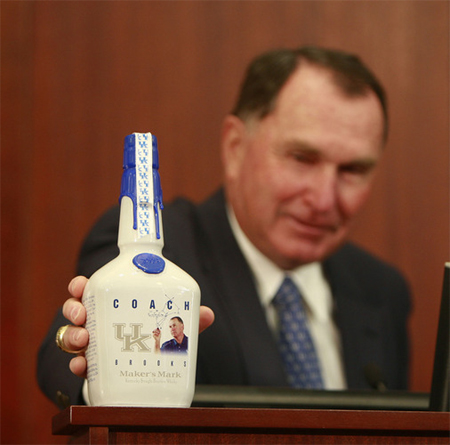 A match made in Heaven. That would be Rich Brooks and Maker's Mark. But, um, given college students' reputation, the official press release could probably have a better headline.

Boy Wonder, backing up his tough talk. By becoming the first Tennessee coach in 27 years to schedule an FCS team.

If you're prone to snark over this move, keep in mind the very next opponent that Tennessee plays -- Oregon.  Then immediately after the Oregon game, Florida comes to town.

Thus dies one more bullet point in the bragging rights of one of the very few power teams to schedule a real nonconference schedule.  Keeping in mind that UT also plays Florida, Georgia and Alabama every year, with most years featuring at least one more perennial giant from the West, it's hard to defy the logic given in this move.

Sorry, not buying it. Playing a lower-division team -- barring (a) a last-minute (i.e., in-season or immediately pre-season) scheduling change or (b) threat of legislation (though I wish South Carolina and Clemson had called the bluff) -- is lame. The rule never should have been changed to allow it more than once every two years. All it does is cheat the fans.

Hooper also puts together a nice post on zone blocking, with charts and everything. Ooooh. Charts.

Nick Calathes will not make it in the NBA Draft. Calathes has declared for the draft, Florida fans, but never fear.

Okay, the important keyphrase here is "not... sign with an agent", and for heaven's sakes, you'd think the NBA scouts would tell Nick to return to school for at least one additional year. At least.

Nick Calathes will make it in the NBA Draft. Calathes has declared for the draft. Be afraid, Florida fans; be very afraid.

Calathes is as good as gone. The chance to return is not for guys like Calathes who have talent and a comfortable lifestyle without an NBA gig. It's for athletes lacking a jumper but who need the NBA to support their family. That way, if that kid is not drafted, at least he has not surrendered his collegiate status. Calathes, if not drafted, will go overseas.

Julio Jones has nothing on Eric Berry. Jones ended up a student senator. Berry will be president. Well, of the Tennessee student body, anyway.

COLLEGE FOOTBALL MIGHT HAVE A PLAYOFF!!! Except, no, it won't because the Pac-10 was only part of the roadblock to a playoff. The other part was Jim Delany, which makes the next-to-last sentence of this column almost incoherent.

Jim Donnan got $250,000 for being fired? Sorry to one of the good PR people out there, but that is never "old news." Hopefully, the release of this book will have more on a "side deal" between Donnan and Georgia President Michael Adams, because that there's a doozy. (I've covered way too many of these people in my day job to comment too extensively on this, but it's definitely worth the read.) One correction: The UGA Foundation did not sever ties with the university, if I remember correctly. The University System of Georgia Board of Regents ordered UGA to break with the foundation.

At some point, this might stop getting stranger. But probably not. We'll never likely know the full truth, and it's a sad commentary on society that it's unclear whom we should trust.

Which means -- what, exactly?

Paul Davis, RIP. The former Mississippi State head coach's finest achievement was guiding the Western Division Bulldogs to the Liberty Bowl. Which, when you're coaching in Starkville, is pretty good. As always condolences to his family, friends and university.