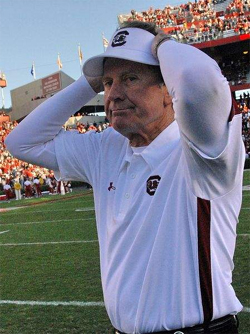 the one about competing for the SEC East title in 2007? Yeah, didn't really happen. But that's no reason to give a giddy -- well, let's not call it a "prediction," mkay?

Recruits help, too, and Carolina's class was ranked as high a No. 6 nationally by one service and No. 12 by another.

"I told those guys the other day, 'With talent like that, fellas, we should finish in the Top 10,'" Spurrier said. "There's been a poor attitude around here and that has to change."

Spurrier's confidence also stems from the fact that he appears to have finally slayed a problem that has haunted him since he arrived in Columbia: A dismissive attitidue toward coughcough unofficial coughcough workouts. And that whole "losing too many coaches" thing?

"Some of the changes were on the way," he said of the former staff. "We encouraged two or three of them to look around and believe me, we didn't beg any of them to stay, I can promise you that."

Herschel Walker, calling himself "the original Pokemon." You're welcome. (I would embed it, but the moronic people who put up the video disabled that option.)

If you needed more than mental pictures of a shirtless Monte Kiffin ... The AJC has by far the best version of the -- nontraditional -- recruiting practices of the Boy Wonder regime in Knoxville.

"The coaches told us to stand up, but nobody really knew what to do. We started clapping, sort of like one of those ‘Ah, this feels awkward' kind of things," Volger said. "The coaches yelled ‘OK, we're going to give you another shot. We've leaving the room. When we come back in here, we want it really to get crazy.'"

Worth the full read. Roll Bama Roll, meanwhile, sees reason for Tide fans to, um, get crunked over this, advising them to "sit back and enjoy the show, I think we're all going to love how this movie unfolds."

Baseball rankings. In Baseball America, LSU is now No. 1, taking over from formerly top-ranked Texas A&M, which lost twice last week. Georgia's deconstruction of Arizona moved the Dawgs from No. 12 into the Top 10, while Mississippi dropped a spot to No. 14 after going 2-1. The only other team in last week's poll, No. 24 Florida, is gone after getting swept in ugly fashion by Miami.

St. Nick isn't even making that much. How would you feel if you won a $5 million judgment against the NCAA? If you said "cheated," you're right.

A judge threw out the verdict and Keller appealed. But he has now dropped the appeal, and lawyer Don Word said Keller hopes for a second trial in Jackson County. Word said it's possible jurors could award Keller more money in a retrial.

Everybody knows it's that sixth million that really makes you rich.

Things I promise to post this week. Reviews of football seasons for: Alabama, Florida, Mississippi and Vandy. (Not necessarily in that order.) Something about Brian Butler. An open thread for South Carolina-Tennessee, at least. And I'll probably liveblog Selection Sunday, or whatever they call it. My wisdom tooth recovery appears to be going well and the two-hour 24 aired tonight, so aside from late hours covering the Florida Legislature, your humble correspondent is ready to have a big week here.