UGA: Be vewy, vewy quiet. We awe hunting Missouwi coaches. In contrast to the clanging Alabama romance of VCU head coach Anthony Grant and the Billy Gillispie-Billy Donovan-Grant circus currently gripping a quarter of the SEC, Georgia has gone back to those days when coaching searches were decidedly quieter.

Westerdawg highlights Missouri head coach Mike Anderson and points out that Mizzou probably doesn't have the money to keep up with SEC schools. Even so, Georgia fans will have to wait. The Tigers beat the Tigers -- er, UM beat UM -- er, Missouri beat Memphis in the NCAA tournament, extending its season and shredding C&F's bracket in the process.

Johnny Majors returns to Tennessee. Not to actually coach, but to praise Boy Wonder's practice, among other things. He and Monte also recalled their little-known shared service in the War of 1812.

Barnhart: Congress should keep out of college football. Common sense, really, but when you've lost Barnhart, you've basically lost half of the intelligent MSM punditry. C&F would actually welcome a Congressional investigation of the BCS on one condition: It must be led by U.S. Rep. Corrine Brown.

That would set the drive for a playoff back, what, a decade?

File under "no one, Surprising." Joe Cribbs Car Wash finishes his countdown of the issues facing Auburn this spring. You get one guess at No. 1. Okay, so "Gene Chizik's fashion choices," was reasonable, so I'll give you another one. 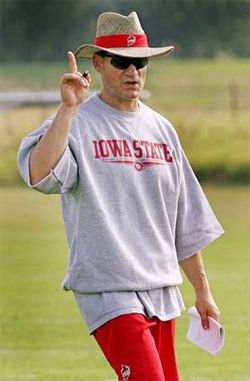 'The hat makes the wardrobe, gentlemen.'

On the bright side, the apple-bobbing team wants him. South Carolina FB Dustyn McElroy -- of whom you've never heard -- shows off his ultimate fight skills. Unfortunately, Steve Spurrier is more a fan of old-fashion wrasslin'.

USC backup fullback Dustyn McElroy has been dismissed from the team after allegedly biting a man in the face during a fight outside the Village Idiot bar and restaurant in Five Points last week.

Columbia police say the 22-year-old McElroy was celebrating St. Patrick's Day at the popular student hangout when he became involved in an altercation that continued outside after bouncers removed the combatants from the bar.

According to the incident report, when a man tried to break up the fight, McElroy placed him in a "bear hug" and bit him on the left cheek, causing a "severe facial laceration." The man was not identified in the report.

Glendale and New Orleans, we choose to forget. Please welcome new SB Nation Ohio State blog We Will Always Have Tempe. Remember, if you choose to vist them, to comment. very. slowly.