Share All sharing options for: Process Story: Has Alabama Returned to Glory? 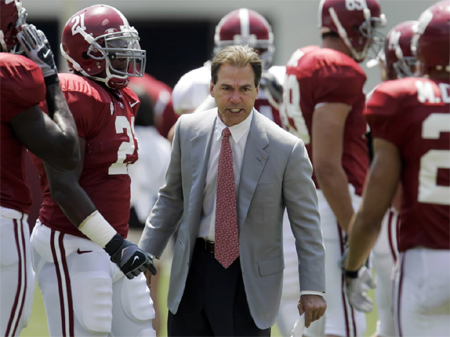 Uh-oh. Somebody's not following The Process.

No one is laughing anymore.

Not after Alabama's undefeated regular season, a 12-0 effort that nonetheless collapsed into consecutive losses against Florida in the SEC Championship Game and Utah in the Sugar Bowl. And not after Saban has hauled in yet another highly-ranked recruiting class, following the simple formula he used to turn LSU back into a college football powerhouse: Recruit, Win, Repeat.

The question, of course, is whether Saban can keep up the "win" and "repeat" part of that equation. 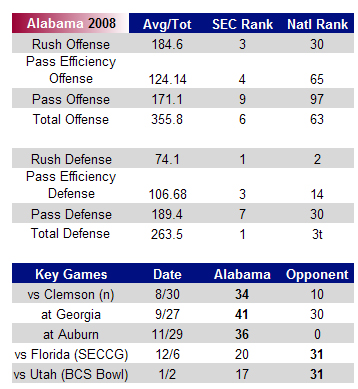 Remember, Alabama has seen almost as many return-to-glory mirages in the past 15 years as has Notre Dame. Mike DuBose and Mike Shula also had 10-win seasons, and both were fired the next year after disappointing seasons.

Adding to the intrigue about 2009 is that there is almost no doubt that the Tide overperformed (at least stastically) in 2008. Nick Saban had never had an undefeated season before 2008 and Alabama's most impressive wins -- Clemson, Georgia and LSU -- all looked considerably less valuable after the season than they did at the time. (An argument can  be made that the victory against Ole Miss now looks better than any of those three -- but with the erractic nature of the 2008 Rebels, what would that tell us?) The Tide's two losses -- against Utah and Florida -- came against the best teams Alabama faced all year.

Now, take away John Parker Wilson, Glen Coffee, Andre Smith (slowly but surely making his way to the NFL), Antoine Caldwell and Rashad Johnson, and what do you have? Alabama at Ole Miss might decide the SEC West in 2009, but is there any indication that this year's version of the Tide would be better equipped to beat the Gators in the SEC Championship Game if both end up there?

For most fan bases, it would be ridiculous to even ponder that question. It would be premature to begin with, and the idea of even having a chance to get to the conference title game for the second year in the row would leave boosters giddy.

But this is Alabama, and Saban has now raised the expectations back to their normal, stratospheric levels. One can only imagine how many fans are now taking another SEC title run -- and a shot at the crystal football -- for granted.

Saban best hope "The Process" continues to work. For his sake.