Official me-me: Kiffin crazy like a fox. Yes, it's now time for every MSM columnist to show his counterintuitive stripes by saying that Boy Wonder knows exactly what he's doing. Dennis Dodd jumps on board. And if you don't get it -- well, that's because you're just a dumb ole fan.

Now Kiffin has called to tell you that it was all intentional. No one is that dumb, right? But life is three dimensional and we aren't used to three dimensional in college football. Unfortunately, this sport and its fans tend to view things on a flat plane 120 yards long.

You know, now, that Lane Kiffin gets it. We're all being played. The networks. The writers. The players. Gator Nation. Even Vol Nation.

It's not that I doubt Boy Wonder means to say some or all of what he says. It's that he doesn't realize what he's getting into. No, Urban Meyer doesn't need the taunting to want to hang 50 on the Vols. But the prodding by Kiffin gives Meyer yet another reason to try to score half a hundred.

At least the money's good. Almost all of the Tennessee assistants will get raises next year regardless of how well the team does. Eat your heart out, AIG. (HT: Rocky Top Talk)

Okay, this is a bit creepy. The Promise, as they're calling it, has been immortalized. Apparently, they didn't have room to include lesser speeches, like "I Have a Dream" and FDR's Pearl Harbor Address. 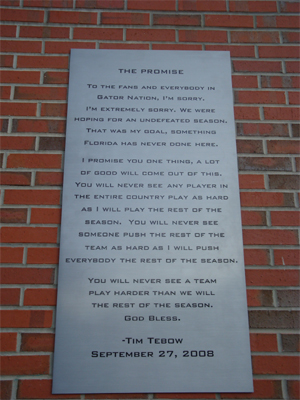 Words that will last forever.

But The Promise might not mean much, because FSU President T.K. Wetherell has a plan to beat the Gators.

We're going to send a graduate assistant down to write a [paper] for Tebow, and go ahead and turn it in.

And then we're not going to tell anybody, until about the 15th of August. And we're going to say, Oh, by the way, look what happened. Urban [Meyer] doesn't know anything about this - he's not involved. And the letter according to the NCAA - you think a violation occurred, not that it did occur, you think it occurred, you've got to sit him.

Well, we've got the proof, we've the [paper], we've got the one he turned in, we've got the one the graduate assistant [did]. He violated the rules. He's ineligible ... now, they can redshirt him next year, and they may need to do that because they're going to need a quarterback, anyway, in two years and that may not be a bad idea. (HT: EDSBS)

The odd thing about this is, it appears that Wetherell has spent a good deal of time thinking this through. Nah. I'm sure he was just throwin' it out there.

Mr. Bulter, it's NCAA Enforcement on Line 1. How many ears in Indianapolis perked up when they heard this Bryce Brown gem?

[Brian Bulter] helped a lot. He's taken a hard, heavy hit on this as well. But like I said, God put this in place. This could have happened to anybody, but he picked us two. Brian's been there 100 percent. Without him, none of this would be possible.

I have a feeling it will be awhile before we've heard the last of this.

If you've signed on before noon ET, you still have a chance to register for the Team Speed Kills Tournament Challenge.

NIT Wednesday. According to Orange and Blue Hue, Florida loses by -22, which I think means they won. Auburn advances after a closer game with UT-Martin.

Play ball! With 11 teams in action, everyone wins save Arkansas, who loses to Nebraska. [ The SEC roundup ]

'But Tony ...' 'Nah nah nah, I can't hear you!!!' Barnhart says Georgia's offense will "be just fine" after losing, you know, the entire offense.

Yes QB Matthew Stafford and RB Knowshon Moreno are gone, but the offensive line, which had to be patched together for all of the 2008 season, is now solid and finally has some depth. ... QB Joe Cox doesn't have the pure talent of a D.J. Shockley, another Georgia quarterback who waited his turn behind a star, but he does have the leadership.

Again, Georgia fans will tell you until they are blue in the face that the AJC is shamelessly pro-Tech and anti-Dawgs. Which is why, based on nothing more than "leadership," the lead college football columnist says there won't be much drop-off on offense. Maybe because the AJC has the audacity to try to find out what's going on when a key prospect is released.

Wind sprints. Mississippi fans are a touch unhappy with their schedule, and really anyone who doesn't like empty carbs should be ... Stephen Garcia is a father, and has been for some time, though how I missed this happening I do not know ... More on Herschel Walker's time on The Apprentice ... There are more enjoyable ways to spend $300. You could have root canal done, for example ... How many hundred thousand per win do you think this will turn out to be? ... Mike Leach called NFL coaches either wimps or incompetent -- and he's right ...

Upcoming. I honestly think the Alabama season review should be up this evening, with the Florida and Ole Miss reviews following early next week. Then, we can move on to other things. It's the SEC, though, so football is always part of the discussion.