Does the SEC Have a Shot at Having a Sweet 16 Team?

Share All sharing options for: Does the SEC Have a Shot at Having a Sweet 16 Team?

The selection committee was definitely not impressed by SEC men's basketball this season, and it's hard to make the case that anyone was. While SEC football had a bit of a down year last time around, men's basketball fell off the map.

The regular season champ is an eight seed. The tournament champ is a 13 seed and just happy to be there. The lone at large is all of a nine seed.

There's no guarantee any of these teams will make the second round, much less the Sweet 16, but is there a chance an SEC team could be playing on the second weekend? Let's see what history says.

As a 13 seed who had to win the conference tournament just to get in, the answer is yes, the Bulldogs have the largest burden of history to overcome. Despite two teams from this line winning last year, only 20 of the 96 total 13 seeds have ever won a single game. On the plus side, that averages out to about one a year.

On the down side, only four 13 seeds have ever gotten to the Sweet 16.

If you believe college basketball has become more chaotic over the years as parity has grown, and I think we all saw a bit of that this season, then it's encouraging that one of those 13 seeds broke through just three years ago. If you remember, Bradley made it all the way to the Sweet 16 after winning the infamous BRAD-PITT game. 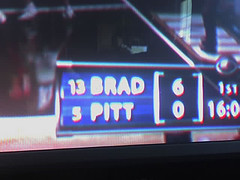 Yes, it really did happen. Photo via Flickr user KRob2005.

I will never count out Mississippi State as long as a healthy Jarvis Varnado is patrolling the interior, but the Bulldogs have mighty long odds to overcome.

Believe it or not, the Vols have the best chance at making the second round of any of these three teams. Nine seeds are 52-44 all time against eight seeds.

Unfortunately, that's about all nine seeds are good at. Only three of them have ever made the Sweet 16. If you remember from four paragraphs ago, that's one less than the total number of 13 seeds that have made it that far.

In a bit of serendipity, Tennessee's second round matchup would be against Pitt. The same coach at Pitt that enabled a 13 seed to get to the Sweet 16 (Jamie Dixon) is still there, and he hasn't exactly been known for reliability in the tournament between then and now.

Only one nine seed has ever won a Sweet 16 game, and it's doubtful it would matter anyway in history's lens. Tennessee itself has never made it to the Elite Eight.

An eight seed seems awfully low for the regular season champ of a power conference. It is the position with the lowest chance of winning of any of the designated first round favorites.

The good news for the Tigers if they get past Butler is that eight seeds are three times better at getting to the Sweet 16 than nine seeds are. Nine of them have made it that far, and six of those nine went on to the Elite Eight.

The real killer of it is that a win over Butler means a date with one seed North Carolina in Greensboro. That's a real slap in the face for a major conference champion. Not a single one seed has lost an opening weekend game in its home state, and there are by far more Tar Heel fans in the state of North Carolina than any other school.

I'd give LSU a fighting chance if Ty Lawson can't play, what with the fact that North Carolina occasionally forgets to play defense and all. Lawson is the straw that stirs their powder blue drink, and they're not the same team offensively without him.

Still, this is an awfully harsh draw for LSU.

All things considered, I'd give Tennessee the best chance at making the Sweet 16. I think LSU is probably a better team, but I can't see UNC losing in Greensboro to an eight seed.