Echoes from Starkville: Was Vanderbilt Good, or Just Lucky?

Share All sharing options for: Echoes from Starkville: Was Vanderbilt Good, or Just Lucky?

It was almost a year ago that SMQ, now Dr. Saturday, published a post about Mississippi State that ended up being a prescient warning of what might happen to the Bulldogs after their breakout season. Though he didn't necessarily know how Mississippi State's 2008 season would turn out, some of the uneasiness he expressed ended up being spot on.

writing about the Bulldogs for a magazine coming out this summer, I was reminded just how frustrating it is to try to figure out where they're going based on those performances. ...

MSU was outgained by 73 yards per conference game, a wider margin than in its 1-7 season in 2006, and finished last in the SEC again in passing, pass efficiency and total offense. ...

This is not a very good omen: defensive and special teams touchdowns are about as reliable as lightning strikes, and it required a spate of them to get by last when the defense was playing well part of the time. If the defense regresses, even that kind of unlikely opportunism won't be able to turn the tide.

Certainly, no conference could host such a team two years in a row. Only, maybe it could -- if you look at some of the numbers SMQ crunched for Mississippi State's SEC games and compare them to the same numbers for Vanderbilt's this year.

Looking at these numbers, one can't help but be struck by how dramatically similar they seem. Vanderbilt's numbers were still significantly worse than their opponents' 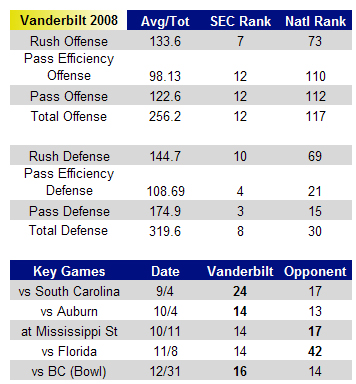 overall and far worse in the games that the Commodores lost than in the games that they won. And while the overall turnover swing isn't as large for Vanderbilt as for Mississippi State -- 8 and 22, respectively -- it's even larger proportionally; the Bulldogs claimed half of the turnovers in its SEC games in 2007, while Vanderbilt claimed 7/8 of theirs in 2008. (Disclaimer: SMQ used the overall turnover margin for Mississippi State in the top chart; for SEC games, it was zero. I thought pulling out the SEC numbers was significant, so I did that instead for Vanderbilt.)

And so we come back to the same question that bothered SMQ last year: What, exactly, do you make of Vanderbilt?

I don't say this to tear the Commodores down. With the exception of their win over South Carolina, I was cheering almost as hard as any non-Vanderbilt fan for the 'Dores to get to a bowl. Being a Gamecock fan, I have a natural affinity for the underdog. But how did Vanderbilt decide which team was going to show up? Or did they? Only a bizarre bounce on special teams allowed the Commodores to defeat South Carolina, while Joker Phillips' poor choice of strategy (yes, let's throw the ball as close to D.J. Moore as we can, as many times as we can) aided the victory against Kentucky. How does a team edge Ole Miss 23-17 and lose to Tennessee 20-10? Beat Boston College but lose to Duke? 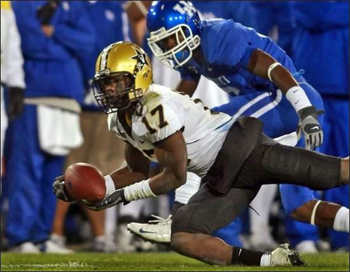 Or are we looking at the wrong side of the coin? Was it the tendency of select Vanderbilt opponents to self-destruct that put the 'Dores in the postseason for the first time in a quarter-century? Vanderbilt won the famed "turnover battle" in three of its four SEC victories but only one of its four SEC losses -- coincidentally enough, in the loss to Mississippi State, a dreadful game in which the times combined for 354 yards of offense. If it was, in fact, the implosion of opponents that created the triumphant season of 2008, is there any reason to think that Vanderbilt can do it again in 2009?