Boulevard of Broken Dreams: Georgia and the Woes of 10-3

Share All sharing options for: Boulevard of Broken Dreams: Georgia and the Woes of 10-3

EDITOR'S NOTE: Over the next several days, I'll be doing season reviews for some of the teams about whom I still feel like there's something to be said. To a greater or lesser extent, I have in earlier posts wrapped up the seasons for Auburn, Mississippi State, Tennessee, Vanderbilt. There might also be some teams about whom I don't have much to say. Apologies in advance if one of those ends up being yours.

As I was thinking about what to write about Georgia's seesaw 10-3 campaign, I asked for a bit of advice. (And got some good insights from commenters to that 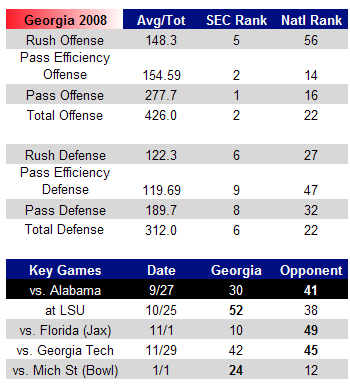 FanPost and, of course, from the Mayor himself.) This was a little awkward for me; I generally like to collect my own thoughts, look at some numbers, and then put it out here on the blog for you, dear reader, to either enjoy or pick apart.

But this year's Georgia team truly baffles me. Sure, I'm right about some teams and wrong about others every year. The 4-8 prediction for Arkansas was pretty close; 9-3 was a bit off for LSU. I was down on Tennessee, though not down enough, while I whiffed on Mississippi.

But Georgia -- I completely missed Georgia. By no means was I alone in calling for the Dawgs to have a better season than they did. For every other team, though, I can tell you why I was wrong. For LSU, I was too certain that talent and coaching could overcome the loss of Ryan Perrilloux. For Mississippi, I underestimated Houston Nutt and Jevan Snead.

On Georgia, I've got nothing. Sure, the injury to Trinton Sturdivant was (in retrospect) a big loss for the offense. But Sturdivant didn't play defense. Nor did anyone else on the team, at least in the second half of the season. In its last five regular-season games, Georgia gave up 183 points. Only once in that stretch did Georgia allow fewer than 38 points -- and that was at Auburn.

Now, some Georgia fans might feel compelled to defend the Dawgs by pointing out that the Red and Black did go 10-3 this season. But those three losses were for the most part so ugly -- and some of the wins so unimpressive -- that the record doesn't truly reflect the team.

Only Arkansas and Western Kentucky, for example, would allow as many or more points against Alabama. Western Kentucky was also the only other FBS team to give up more than 27 points to Kentucky -- and the Hilltoppers are still transitioning to FBS. 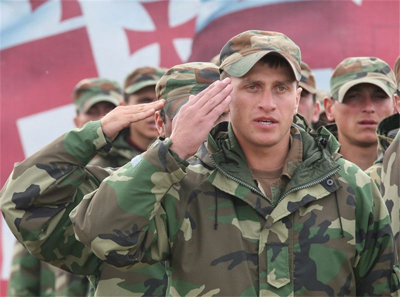 The more effective of the two Georgia defenses?

Granted, the offense didn't reach its sky-high pre-season potential. Knowshon Moreno was 20th in the country in rushing, but 107.7 ypg isn't really Heisman material. And Matthew Stafford was a very good quarterback, but probably not as good as you think if your main source of information about him is Gary Danielson.

The defense, though, was what hurt this team the most in the three losses, and what made some of the wins far closer than they should have been. There was a reason many Georgia fans saw the Miami DC job as "a great fit" for Willie Martinez, and it had nothing to do with how happy Martinez would be in Coral Gables. These are the kinder Georgia fans; the less kind started petition drives.

For now, at least, Mark Richt has remained loyal to Martinez. But it is not a stretch to think that fan frustration with Martinez could end up putting Richt on the hot seat -- in some corners, it already has.

Before we get too ridiculous here, let me state unequivocally that I don't believe Richt will be fighting for his job next season. But with Moreno and Stafford both leaving for the NFL, you have to wonder how well the Dawgs can do this fall. And if Georgia disappoints for a third year out of four, you have to wonder if 2010 could be the decisive campaign for Richt. He is already the dean of SEC coaches, and the previous man to hold that honor, Phil Fulmer, proved over the last four years that such longevity can be almost as big a danger in terms of job security as it is an asset.

If those darker clouds begin gathering over Athens and the Dawgs continue their decline, this year will be seen as the beginning of the end of the Mark Richt Era.

Of course, Georgia could surprise to the upside in 2009 and make all this speculation seem myopic, in which case 2008 will be nothing more than a speed bump in an otherwise fine coaching career. And the smart money is on Richt to turn things around. He has always done best when his teams are counted out.

Then again, I've been wrong before.