Share All sharing options for: The 2009 Team Speed Kills 12

By now, you've probably already checked out the SEC recruiting ranks from Scout and Rivals.

And while I generally agree with Year 2 when it comes to following the recruiting season blow-by-blow, I do think it's worth taking a look at once players actually sign. By and large, the final rankings are a good way to measure the general talent level coming into a particular school. This is quite an evolution for your humble correspondent, who once viewed the rating services as slightly less accurate than government economists and slightly more creepy. (I still see them as slightly more creepy, but I digress.)

Scout and Rivals agree on the general outlines of the 2009 SEC recruiting classes. All, save Kentucky and Vanderbilt, are Top 25 material. Alabama and LSU are 1-2 (or 2-1, depending on who's ranking them) and two of the top three teams in the nation. Houston Nutt recruited entire high school teams to come play for him.

There are also a few significant disagreements. Florida comes in fourth in the conference according to Rivals, but ninth according to Scout. Auburn is fifth according ot Scout, eighth per Rivals.

Let us, however, combine the two systems, average them out and take a look at what that tells us. Because all recruiting rankings must have a self-promotional title including at least one number, we'll call it the Team Speed Kills 12 just for fun. 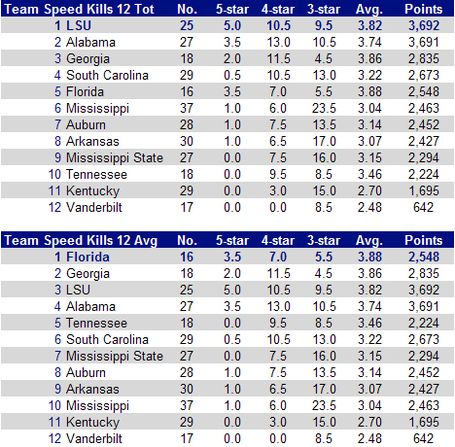 A few caveats here: First of all, Scout awards far larger point totals than Rivals, so that is to be taken into account when looking at the points numbers. And, because it needs to be said just so no one is confused, no one signed half a player of any type. Florida, for example, signed four 3-star players according to Rivals and seven according to Scout. All of that to say that these numbers are even farther from being scientific than the original ratings and rankings, but they give us an idea.

One thing that stands out is that, when we're talking about the total talent haul, Alabama and LSU didn't just beat the field -- they blew it out of the water. There's roughly the same gap between No. 2 Alabama and No. 3 Georgia as there is between the Dawgs and No. 11 Kentucky. (And then there's Vandy. As usual -- sorry, Vandy.) The SEC West could get very interesting in about two or three years, as if the annual Nick Saban vs. Les Miles match-up wasn't intriguing enough to begin with.

After you look at the Scout and Rivals rankings individually, it's not really surprising that Tennessee came in 10th when the two were averaged together. Except that you realize that Tennessee came in 10th, well behind the other three SEC East teams that have consistenly played at, around or above .500 for the last eight years or so and just ahead of rising Kentucky and potential upstart Vanderbilt.

Yes, the ugly unwinding of the Fulmer Era and the beginning of the reign of the Lane Kiffin Familia played into that, but one could deflect that by saying "Auburn," which didn't do a great job but ended up with more points than the Vols after the handing of power to the Chizik Junta. In any case, this is not how Boy Wonder wanted to start. Tennesee has lost to South Carolina two of the last four years after regularly penciling in the Gamecocks as a "W"; ending up with less talent on signing day is not the best way to begin regaining the dominance that locked the Vols into the "Big Three" clique in the East.

That said, Tennessee does far better when considering the average quality of the individual athlete. The Vols came in fifth in terms of the average star rating of its recruits, but still well below Florida and Georgia in the actual number -- Tennessee's recruits are, on average, almost half a star below the Gators' and the Dawgs' -- and just one spot ahead of South Carolina in the rankings.

The most fascinating thing about the averages chart, though, is how the SEC recruiting contest suddenly becomes a four-team race between No. 1 Florida, No. 2 Georgia, No. 3 LSU and No. 4 Alabama. Again, LSU and Alabama are bringing in more talent, but not a better grade of talent. The dominant teams are stocking their shelves differently, but they are still getting plenty of good players.

I do consider Kentucky and Vanderbilt surprises. I expected Kentucky to do better than, say, Mississippi State; Rich Brooks seems to have the Wildcats moving in the right direction, and who knows whether Dan Mullen is the man to turn around the usually dreadful Bulldogs or not. And we all knew Vanderbilt was going to be last, but the gap, coming just more than a month after the team's first bowl-game appearance in a quarter century, was larger than I expected.