Share All sharing options for: Is Spurrier Still Relevant? No. Still Good? Yes.

It has become a well-worn line among columnists over the last few years that college football would be in some way better if Steve Spurrier were able to make South Carolina "relevant." And when they say that the Gamecocks have been irrelevant in the Ol' Ball Coach's four year's at the helm, those columnists are largely correct. Spurrier's South Carolina trophy shelf is most barren: No SEC East Championships, no conference crowns, no year end rankings.

When some South Carolina fans express disappointment with Spurrier, they also have a point. Gamecock faithful were not giddy in the run-up to the 2005 season because of dreams of finally become a team that could be called "average." They saw better bowl berths, higher finishes, maybe even ... well, talk of a national championship was just ridiculous. Wasn't it?

But what no one can honestly say is that Spurrier has been a bad coach in Columbia. Because a case can be made that he is at least the best coach South Carolina has had in nearly 50 years.

NOTE: Chart includes coaches with a winning percentage of .530+.

Granted, most of that will be little consolation if the Gamecocks manage to continue in 6-to-8-win rut they've been stuck in since Spurrier came to Columbia. His goal, after all, was to win the SEC, not to aim for becoming the first coach in school history to win three bowl games. And the offense, Spurrier's calling card during his time in Gainesville, has been lackluster to say the least.

But there is a little historical amnesia going on when people somehow proclaim Spurrier's time in Columbia so far to be a failure. Part of this is to be expected; the "Mouth of the South" stirred up so much ill will among opposing fans during his first stint in the league that many are gleeful to see him hovering around .500.

The problem hasn't been helped by a revolving door of assistants since the ugly end of the 2008 season. The exodus has prompted some to wonder if the remainder of Spurrier's career could now be measured in games instead of seasons.

Despite Spurrier's objections, it looks like some of the assistants are positioning themselves for greater long term stability elsewhere. When Spurrier arrived in Columbia, I felt that he would give them 5-6 years max. ...

The coaching defections plus the mounting losses further convince me that this is Spurrier's last year coaching college football.

That is convincing as far as it goes. What Westerdawg brushes past is that many of the "coaching defections" were under extraordinary conditions, and some of Spurrier's assistants will quite frankly not be missed very much by more than a few Gamecock fans. To wit:

Ron Cooper. Now at LSU. The Gamecocks secondary coach was basically told to find another job. This would have been shortly after he informed the coaching staff that he had secured a commitment from a recruit to whom he had been ordered not to offer a scholarship.

Robert Gillespie. Moved to Oklahoma State. Upon which he said:

"The people behind the walls [at South Carolina] really understand what's going on, and we all see the dedication and commitment that coach Spurrier still puts in. I always tell people that if he weren't committed to being here, he wouldn't be flying around the country meeting with kids."

John Hunt. Fired. Why? Because he was the offensive line coach. Anyone who has seen South Carolina's offensive lines play does not need further explanation.

David Reaves. Gone to Tennessee. To coach with his brother-in-law. Reaves' recruiting work was solid, and might be missed. His work, um, "developing" quarterbacks like Tommy Beecher and Chris Smelley left something to be desired.

Ray Rychleski. Went to join the Indianapolis Colts. You know, perennial Super Bowl contenders, now coached by a long-time Rychleski friend? The special teams coach told a South Carolina beat writer (in the reporter's words) that he "would not have left for another college job."

Mark Smith. Also left for Tennessee in a move that prompted Joe Person (I've linked to him so much, I might as well name him) to quip that Smith would coach at "USC-Rocky Top."

Now, were I to sit here and tell you that losing six coaches is not a cause for a team 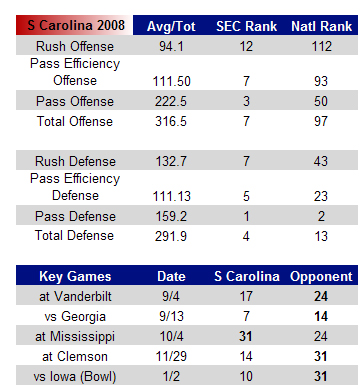 to be a bit concerned, you would laugh at me -- and rightfully so. But in all but two of these cases (Gillespie and Smith), there is legitimate reason to believe that any of the moves would have been made in any year. Unfortunately for Spurrier, four of those situations converged at once.

How long will Spurrier stay around? I honestly don't know. But Spurrier has to know that some bit of his legacy is on the line here. Was Spurrier just a good coach who took over a Florida team with a boatload of talent and rode it to a decade of dominance? Or is he a great coach? An SEC East title or two at South Carolina would resoundingly answer that question -- if Spurrier can pull it off.

That, of course, is both the promise and the problem with Spurrier continuing at South Carolina. At what point has an experiment been exposed as a bad idea? And who pulls the plug?

The fifth year might, actually, provide us some sort of an anwer. Generally, a coach has done about all he will do by year five. No one will pick South Carolina to win the SEC East next year, nor should they. But another seven-win season would give Gamecock fans few reasons to believe that Spurrier will ever guide them to Atlanta for anything more than the Peach Bowl.