Play (more) ball! Eight SEC teams were in action Tuesday. The biggest change? Eh, either that Arkansas is no longer undefeated or that Ole Miss, you know, managed to win another game. Against Central Arkansas, granted, but it works.

Auburn and Alabama roared back to life, while Tennessee ... well, Tennessee made a spirited statement that it has no intention of being forced to travel to Hoover at season's end. (They tend to subpoena Vols down there, so maybe that's for the best.) Your full Tuesday wrap-up courtesy of SEC SIDs is hyah.

SEC East showdown. Yes, C&F is aware that there is some sort of important "bas-ket-ball" game being played this evening between Kentucky and South Carolina. You can get complete pregame coverage at A Sea of Blue and Garnet and Black Attack, and we'll put up an open game thread for those who want to comment.

With Florida's loss to LSU on Tuesday, the winner takes over the driver's seat in the wild ferret fight that is the SEC East. And congratulations to the Bayou Bengals, who will now at least be called "co-SEC Regular Season Champions," which is about like being called MVP of the International Bowl.

About those seedings ... Meanwhile, SBN's LSU blog, And the Valley Shook, thinks everybody should hold up on the enthusiasm for a team that is succeeding in a pretty dreadful SEC.

A gaudy overall record and a division title in the SEC don't go as far as they once did.  When I was a kid, the conference was littered with genuine contenders.  It may have been the second best conference in the country (behind the always stellar ACC) in days gone by.  Heck, even just a couple years ago the SEC was really tough.

This year it's abysmal.  Just by way of illustration, please notice that we have 11 wins.  We've beaten 8 different teams in the conference.  How many of those wins would be labeled "quality wins"?  By which I mean, how many times this season have we beaten a team that is, right now, a safe bet to make it into the tournament?

See, football playoff supporters? A team like that could never be in the national title game in college footba -- 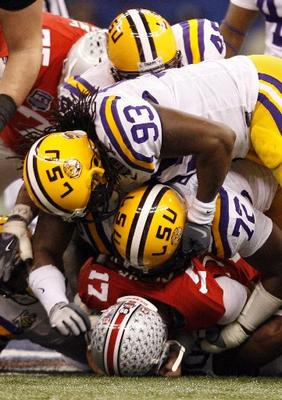 Tennessee fans, on the other hand, are worried about even making the tournament.

But then there might never have been "3-2." Track Em Tigers makes a case for Auburn being in the SEC East. Your humble correspondent is not sold -- as a South Carolina fan, he thinks the Vols are right where they belong, more or less -- but it's worth a read.