Rounding the Bases // This Weekend in SEC Baseball

Share All sharing options for: Rounding the Bases // This Weekend in SEC Baseball

Delayed this week because South Carolina and LSU finished on Monday. Future editions will hopefully have a scoreboard and a few other things.

So much for that turnaround season. Ole Miss, widely expected to turn into a contender after a year in which it was -- well -- not, began the season inauspiciously with a close win against Liberty. It then recovered from nearly losing and managed to actually lose its last two games of the weekend, including dropping a game to Mercer -- or, as Red Solo Cup called them, "Mercer????" 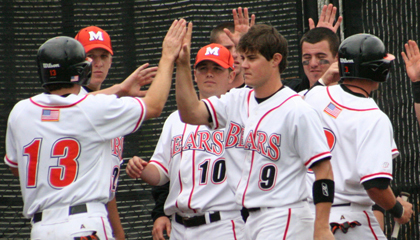 One of the great things about baseball, even college baseball, is that one bad weekend can end up meaning nothing. But when your fielding is as poor as the Rebels -- 5 errors on the weekend, or a 4.6 percent error rate -- you have to really hope it's just a case of Opening Weekend jitters. Or that your players have an unbelievable range. Because defense is the one thing in baseball that each individual player and team can control. It is not pitcher vs. batter, where a pitcher might execute the perfect pitch or a batter might just luck into a hit or a home run.

How sweep it is. Four SEC teams are undefeated after opening weekend: LSU (3-0 vs. Villanova), Florida (3-0 vs. Louisville), Georgia (3-0 against Youngstown State) and South Carolina (3-0 vs. Duquesne). Florida is the only one who played a BA Top 25 team, so that should be taken into account, so perhaps the Gators get a slight edge right now in the resume department.

No SEC team got swept this weekend, though Auburn was defeated twice by Elon and Alabama twice by Southeast Missouri State, both of which are bad enough to almost count as sweeps -- especially for Alabama, who began the season as BA No. 21.

More power? It's really way to early to be looking at anything like this, but let's peek at the extra-base and power leaders anyway, because there's only so much that you can actually survey in the first weekend.

Survey says ... Baseball America drops Alabama out of the rankings for the Tide's unceremonious implosion, while Ole Miss goes from No. 6 to No. 13. Other than that, things were positive for the SEC. LSU remains No. 2, Georgia rises to No. 12 from No. 14, Arkansas finishes the week at No. 21, up one, and Florida makes its debut at No. 24 -- just one spot below where Louisville was before the Gators knocked the Cardinals from the ranks.