Share All sharing options for: An Appreciation: John Parker Wilson

EDITOR'S NOTE: Seventh and final installment in a series honoring those who spent four years in the SEC -- for better or for worse.

John Parker Wilson might be an odd addition to our list so far. After all, unlike most of the other players in this series, he had no significant playing time in his freshman year in 2005, going 7-for-12 in mop-up duty against Middle Tennessee, South Carolina, Florida and Utah State before taking the ball during the Brodie Croyle sack-fest against Auburn. He never played in a game decided by fewer than 10 points.

But he took over as starter his sophomore year, and continued to plug along in his own game-management style. In his three years at the helm of the Bama offense, he never had a 2-to-1 TD-to-INT ratio over the course of a season; never averaged more than 7.1 yards an attempt in a given year (something Blake Mitchell, for example did twice); never completed 60 percent of his passes in a campaign.

Wilson had some truly abysmal games: going 14-of-40 with three sacks (though 3 TDs against 1 INT) against LSU in 2007, for example, or his eight-sack, two-pick showing against Utah. (Though, again, in fairness, he was 18-of-30 and threw for a touchdown against the Utes.)

There are also plenty of Wilson moments for Alabama fans to remember fondly. This is the quarterback who played well against Georgia this year, going 13-of-16 for 205 yards and a score, or who completed 22 of 30 attempts for 180 yards and 2 TDs in the waxing of Clemson. Wilson's best game was one of the bright spots of the mediocre 2007 campaign: 32-of-46, 363 yards, 3 TDs, 0 INT in a 41-17 obliteration of hated Tennessee. 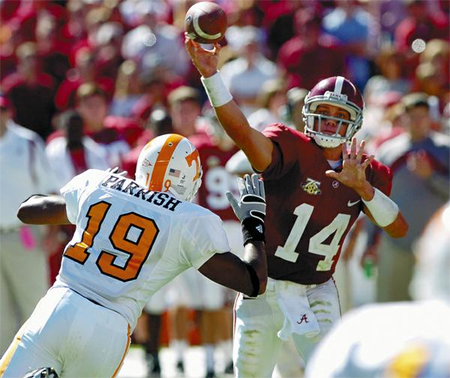 Wilson also leaves with a winning record of 25-15 -- nothing to scoff at in the SEC. And some of those losses weren't really his fault. He actually played very well in Alabama's 2006 loss to Arkansas -- 16-of-20 for 243 yards, 3 TDs and 0 INTs, not mention a 23-yard rush -- but Mike Shula couldn't figure out it just wasn't Leigh Tiffin's day.

So who will Alabama fans remember? The John Parker Wilson who went 12-0 in the 2008 regular season, when eight or nine wins could have been considered an achievement? Or the signal-caller who managed, over the course of his career, to lose to Utah, Louisiana-Monroe and Mississippi State (twice!)?

Maybe both. Because both, in a way, were John Parker Wilson. Frustratingly, maddeningly inconsistent. And, in his last year, more than his fans ever really expected.