We Were Wrong, But No Need to Apologize: Kentucky Learns the Hard Way

Share All sharing options for: We Were Wrong, But No Need to Apologize: Kentucky Learns the Hard Way

It was, they said, a snub -- a sign of the old way of thinking. When the media types and the talking heads and the bloggers assembled near Birmingham and voted that Kentucky would be fifth in the SEC East at season's end, well, they would be proven wrong.

"We're a lot of guys (who) have a lot of chips on our shoulders," said defensive end Jeremy Jarmon.

"You're always going to have naysayers, people trying to put you down," he said. "For me, being a 5'11" white guy as a wide receiver, you're never expected to play in the SEC in the first place, so it's all bulletin board material for inspiration to prove people wrong."

In fact, the media was wrong about Kentucky. The Wildcats did not finish fifth in the 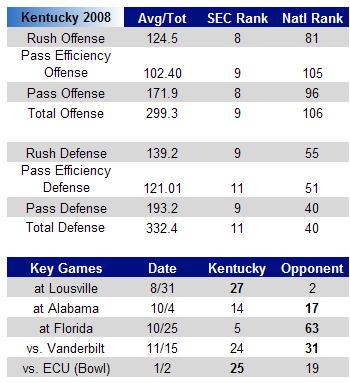 SEC East, according to the measure used by the league. They finished sixth.

Last in the division -- in part because they lost to every other team in the division. Their two SEC wins were fewer than Tennessee's three, and came against arguably the two worst teams in the conference: Arkansas and Mississippi State. If you disqualify Tennessee because the Vols had a worse overall record, Kentucky does come in fifth. Of course, that ignores the fact that Tennessee's regular season nonconference schedule was UCLA, UAB, Northern Illinois and Wyoming, while Kentucky's was Louisville, Middle Tennessee State, Norfolk State (FCS) and Western Kentucky (transitioning to FBS).

In fact, that was Kentucky's opening month -- a beginning schedule so soft, it's not hard to imaging Rich Brooks shaping it out of Play-Doh. After starting 4-0 against that, um, pedestrian slate, Kentucky's proceeded to go 2-6 for the rest of the regular season before triumphing against East Carolina in what has to be one of the most bizarre football games ever played. (How else to describe a contest featuring a pre-game near fight; a winning 56-yard fumble return on the third disputed call in as many minutes; and three blocked PATs, including one after said winning fumble return?)

The Liberty Bowl might have been the first moment that didn't go according to script for Kentucky all season. The year was not only predictable down to the record, but down to the game. Had I given you this schedule for Kentucky at the beginning of the year, what might you have changed? Kentucky defeats Vanderbilt, sure, but that's about it.

The more pressing question for Kentucky fans post-2008 is, Where do we go from here? How do the Wildcats take the step from respectability to contention? Is a full season of Randall Cobb the difference between 7-6 and a trip to Atlanta, either for the SEC Championship Game or the Peach Bowl?

"The 2009 Kentucky football signing class is arguably its best in recent years," its Web site boasts. But that class still ranked 11th of 12 in the SEC, ahead of only Vanderbilt, in either measure used in the Team Speed Kills 12.

When they gather near Birmingham next year, the assembled media will likely once again scribble Kentucky's name in the fifth slot on their SEC East ballots, once again behind South Carolina and ahead of Vanderbilt. They might be off a spot or two in a muddled division that will soon be known as "Florida ... and everyone else."

It will be hard for those reporters to break their habit. So far, Kentucky has given them no reason to.