When your humble correspondent started reviewing the 2008 season for SEC 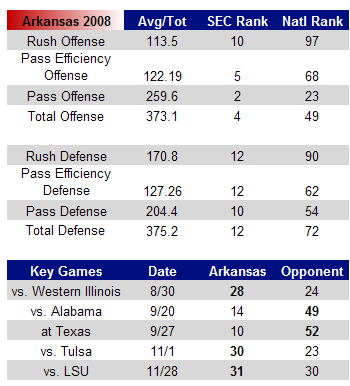 teams, he warned that there might not be that much to say about some of them. Arkansas is one of those teams.

Essentially, 2008 was a wasted year for the Hogs. Moving from a Houston Nutt/Darren McFadden offense to Bobby Petrino's system doesn't happen in a season. The skills required of players all over the field are vastly different. But, still, there is something vaguely haunting in the numbers for Arkansas.

The passing offense was actually pretty decent, Casey Dick-Nathan Dick saga and all: second in the SEC in yardage, fifth in efficiency. But what was absolutely deplorable was the defense, which can be categorized without further research as the worst unit in the SEC.

We knew early on that Arkansas was in trouble, needing rallies to defeat Western Illinois and Louisiana-Monroe, one an FCS teams and the other a functional equivalent. Consecutive torchings at the hands of Alabama, Texas and Florida, a trio that defeated the Hogs by a combined 108 points, simply confirmed our suspicions.

The Gypsy Coach of the South and his team did end up with some victories over decent teams, from BCS Buster favorite Tulsa to LSU. But the wins were all on offense. Arkansas' defense did not hold a single team to fewer than 21 points, despite a schedule containing offensive, ahem, powerhouses like Auburn, Mississippi State and Kentucky. It's nice to have offense, but if Petrino and Co. want to win in the SEC, they have to play defense at some point.

That said, Arkansas did find some good players in 2008: RB Michael Smith turned out more than 107 ypg, while DT Malcolm Sheppard anchored the defense with 14.5 TFL and 6.5 sacks. Both return, and Michigan refugee Ryan Mallett, despite rumors of a wide-open race, is certain to make his debut as starting QB. If Petrino can mold Mallett into a solid signal-caller and the Hogs can find a fix at defense, they could make themselves a factor, though probably not a contender, in the SEC West.

After a yearlong delay, the future has come to Arkansas.

Previous Reviews:
Boulevard of Broken Dreams: Georgia and the Woes of 10-3
Only Human: The Perfectly Average Season No One Saw Coming [LSU]