Only Human: The Perfectly Average Season No One Saw Coming

Share All sharing options for: Only Human: The Perfectly Average Season No One Saw Coming

If anyone had doubts before the season about LSU, they kept it to themselves. Across the mainstream media, the blogosphere 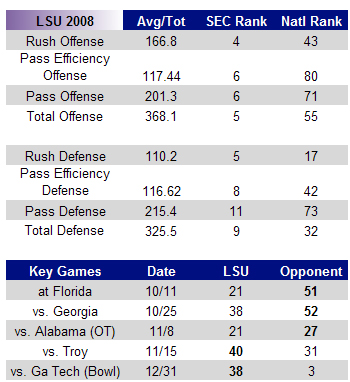 and college football fandom in general, there was one point of agreement about the Bayou Bengals: They would be good -- Top 10 good.

The AP placed LSU at No. 7 preseason. The Tigers were No. 6 in USA Today's poll. No. 7 -- with two first place votes! -- in the BlogPoll. By those standards, your humble correspondent's decision to place LSU tenth looks downright conservative. But, lest you find that a boast, read the words that accompanied that ranking.

The Bengals are one of those teams that you almost have to rank every year by dent of their talent. ... They can almost glide to nine wins, right? With the schedule they have -- maybe. ... the season ends with Tulane, Alabama, Mississippi and at Arkansas. More than one loss among those teams would be stunning.

So much for convential wisdom.

In fairness, the conventional wisdom might have been correct had it not been for the extreme unwisdom of a certain quarterback. Ladies and gentelmen, your signal-caller for the 2008 Jacksonville State Gamecocks. 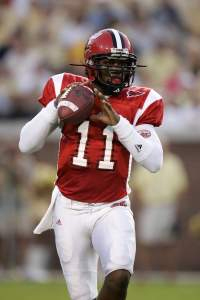 This is almost as easy as reading Lane Kiffin's poker face.

To say Ryan Perrilloux was part of the problem at LSU in 2008 is to engage in an almost criminal level of understatement. It's a straight line from the dismissal of Ryan Perrilloux to LSU fans grasping their hair every time Jarrett Lee threw the ball into the air. "Well, crap. There's another six points we'll have to score."

Lee was not supposed to be thrown to the SEC defensive wolves so soon, if at all. His playing time in 2008 would come as LSU cruised by Troy or exacted its revenge against Arkansas. Not so much, and not so much.

It is perhaps a sign of the bothersome state of QB play in the SEC in 2008 that LSU was still a middling team under center. Of course, some of those numbers were propped up by the late-season emergence of Jordan Jefferson, who was reasonably efficient (even if the completion rate didn't show it) at Arkansas and solid if unspectacular against Georgia Tech (16-25, 142 yards, 1 TD, 0 INT).

Jefferson, whose starting prospects became the subject of a Facebook page, is now the favorite to hold onto the position in 2009. That's unfortunate for Jarrett Lee, who endured far too much as LSU's quarterback to be unceremoniously kicked to the curb. But that is how it sometimes happens in sports. Lee could, of course, still transfer, and some Louisiana sports writers have strongly hinted that doing so would be in his best interest.

But it's unfair to blame the collapse of 2008 on Lee. As subpar as he might have been passing the ball, LSU was even worse defending the pass: 11th in the SEC in yardage allowed, 8th in pass efficiency defense. The running numbers were mediocre, but why run the ball when you can throw it to such effect? Tim Tebow: 210 yards, 2 TDs, 0 INTs. (That said, the Gators also shredded the LSU run defense for 265 yards.) Matthew Stafford: 249 yards, 2 TDs, 0 INTs. (RB Knowshon Moreno contributed 163 yards rushing and a score.) Jevan Snead: 274 yards, 2 TDs, 0 INTs. The list goes on and nightmarishly on.

When Florida scored 51 against LSU, it marked just the fifth time the Bengals had allowed 50+ in SEC play since 1933. Two weeks later, they allowed half a hundred again, this time against Georgia. The season ended allowing 31 points in consecutive games to Troy, Mississippi and Arkansas.

Then, it stopped. LSU held Georgia Tech to a respectable 164 yards rushing (150 yards passing) in the bowl game triumph. Was it a one-game turnaround? Or the first, small step toward success by a relatively young football team? The answer will determine not whether LSU begins 2009 ranked, but whether it ends the season there.