The Game Formerly Known as the Peach Bowl Preview: Playing the Dome

Share All sharing options for: The Game Formerly Known as the Peach Bowl Preview: Playing the Dome

Tennessee and Virginia Tech are a combined 0-7 in the Georgia Dome since the Vols won the SEC Championship Game there in 1998. The teams are on a three game losing streak in the Peach Bowl; the last time either won (Tennessee, 1987) predates the Georgia Dome. (Virginia Tech won the game the year before that.) 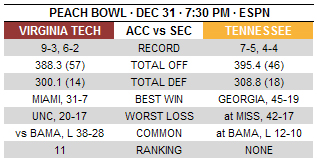 But let's focus for a moment on the two eams that will be playing the game instead of where they're going to be playing it.

Virginia Tech comes in off what must be a disappointing season for some of the Hokie faithful, who have gotten used to playing in the ACC Champioship Game almost every year it's been played. (Though, based on their attendance in the past, it's not like Virginia Tech fans were ever that excited to be there.) Despite a pretty decent season overall, the two ACC losses were enough to keep the Hokies out of Tampa and hand the division to Georgia Tech, which ended up in the Orange Bowl after winning the Championship Game.

Vols fans are decidedly more optimistic. Tennessee started the season out looking like a team that might just have its third losing season in five years after a loss to UCLA. But after a moral victory against Florida, a too-close win against Ohio and a loss to Auburn, the Vols won five of their last seven, the only losses coming by two to Alabama and in a waxing against Ole Miss. It was a better season than might have been expected from the Vols before the season, or at least after Week 2.

Most of the attention will be on the defenses and, as always, the Virginia Tech special teams. (BEAMERBALLBEAMERBALLBEAMERBALL) Monte Kiffin has done a fairly solid job in Knoxville coming from the NFL, and Bud Foster continues to garner enough head coach interest to get better and better contracts from the administration in Blacksburg.

The offenses are mediocre, but have shown signs of promise at times. Tyrod Taylor is probably a bit better than you think even if he's not going to defeat many quality teams with his arm. We've talked enough about Jonathan Crompton's resurgence, and will assume for now that you don't need a refresher course on one of the season's better (if underrated) stories.

But defense rules as the losing streak ends for ...