As before, considering this your open thread. Your humble correspondent will actually be around some.

After a difficult first year, Mike Sherman's efforts to rebuild Texas A&M began to look promising this year. A bowl appearance, a close loss to Texas and a win over Texas Tech make the case that this is a program moving in the right direction, even if the defense could stand a bit of, um, improvement.

Not that Georgia's defense has been the stuff of legends this year, but you might be surprised that it compares much more favorably to the rest of the nation than the Dawgs' offense. That's not entirely unexpected a year after you lose Matthew Stafford and Knowshon Moreno. But it is a reason why the Dawgs will be playing today in Shreveport, and not Jan. 1 in Orlando or Tampa. 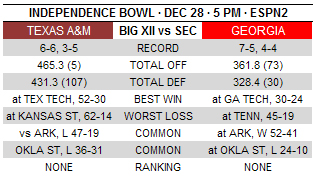 It is also one of the reasons why Mark Richt enters this bowl with more disappointment among Georgia fans that perhaps any postseason game of his tenure. A season that started off promising ended in the Independence Bowl, the kind of game the Dawgs have not gone to for a long time.

Of course, it's not difficult to remember when the offense looked pretty impressive for Georgia. Scoring 52 points agaainst Arkansas in the early weeks of the season -- yes, it was Arkansas, but surely they weren't that bad on defense -- was a reason to think that things would at least turn out well for the Dawgs this year.

Which is one of the odd things about this game. Because Texas A&M's defeat when it faced Arkansas was one of the reasons people started to write off the Aggies earlier this year. A&M didn't really do all that badly on offense when it came to moving the ball, but scoring proved to be a problem. That tends to not be the best way to win a football game. Things like that, though, eventually turn around.

So when you hear that this is going to be a high-scoring game, the only reason not to believe it is that these are bolw games and strange things happen in college football's postseason. (Which is one reason not to pitch the thing overboard. But I digress.) I hope the scoreboard operator got a lot of rest last night, because it's going to be necessary. As far as who wins: Defense won't win this championship, but at least Georgia has one.