Music City Bowl: Looking for a Good End to an Alright Season

Share All sharing options for: Music City Bowl: Looking for a Good End to an Alright Season

I'll be traveling this evening and listening via radio. Make this preview the live thread for the game.

There were times this season when it wasn't hard to imagine either Kentucky or Clemson as teams with a real shot at great seasons. After all, by the time Clemson moved to 8-3 on the year, the Tigers had an impressive win at Miami and would easily mark its ninth win by yet again defeating the cross-state rival South Carolina Gamecocks. And from there, an ACC Championship could be wrapped up with a win over Georgia Tech in Tampa. 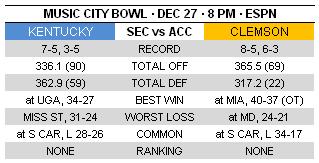 Two losses later, and it's almost a disappointing season for Clemson. The South Carolina game wasn't even close -- 34-17 -- and the Tigers now face almost as difficult an opponent in their bowl game; this is, after all, the same Wildcat team that narrowly avoided a win in Columbia this year.

On the same night that Clemson could begin to dream of a 10-win season or better, Kentucky was looking at the chance of getting to nine victories on the year with a bowl game. The Wildcats had just defeated Georgia in Athens and looked maybe good enough to win against Tennessee. Except the Vols won and made the Wildcats set their goal at eight wins after the bowl game, which is more than Kentucky used to be able to say after a season in which the injury report was longer than the playbook.

This appears to be a pretty evenly matched game. Clemson has the better statistics, but the wins by South Carolina and Georgia (against Georgia Tech) at least appeared to show that the fourth- or fifth-best team in the SEC East can at least match up with the first- or second-best team in the ACC on a given Saturday. Or on a given Sunday, if that's when the bowl game is scheduled.

Kentucky has a terrible run defense and Clemson has C.J. Spiller. The problem for the Tigers is that they also have the same coaching staff that has repeatedly underutilized Spiller for this year (and, in some cases, several years before this one).

That said, I still don't understand how Kentucky has won as many games as it has playing the way it has. (You're not reading that incorrectly; the Wildcats have been outgained by nearly 26 ypg this season.) That catches up to you sooner or later.