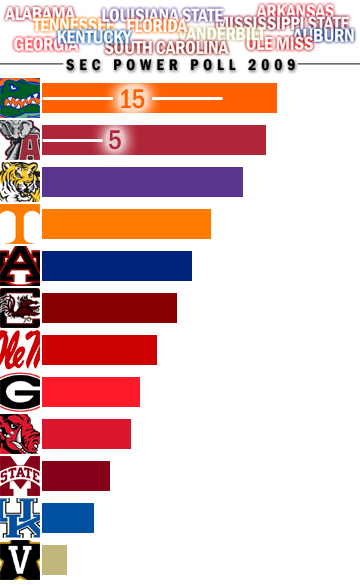 We have a new leader. The Waxin' in Jacksonville and Alabama's ill-timed bye week swaps things from a four-point Alabama advantage to an 11-point Florida edge. LSU also picked up a second-place vote in the fallout from an interesting weekend.

Tennessee moves from No. 6 to No. 4 after blowing out South Carolina. Auburn held the biggest gain on the week, moving five spots to 5th. South Carolina and Ole Miss are both down two places after losses to Tennessee and Auburn, respectively. Georgia falls another place, continuing the Dawgs' downward trend. Kentucky drops three spots to take Mississippi State's place as the Western Division Bulldogs move out of the last two.

Not only am I unconvinced the team that beat Georgia was the "real" Florida as opposed to the Florida we saw for the first seven weeks, but monochrome uniforms are an affront to nature.--War Blog Eagle

Dominated Georgia thoroughly and completely. Eye poking at no additional charge.--Over the Pylon

The Gators proved they don't need the refs to help anymore.--Leftover Hot Dog

At this point, beating Tennessee by any score at all is more impressive than whipping Georgia by however many points you like, isn't it?--War Blog Eagle

Take a week off, drop a spot in the polls.  How do you like dem apples?  That'll teach you to rest.--Orange and Blue Hue

Terrance Cody blocked six more field goals in practice this week. One was a crystal ball circa 2003 with LSU's logo on it.--The ACC & SEC Blog

Still not sold on this team. I've still been underwhelmed by Jordan Jefferson. I haven't heard much from Charles Scott this season.--Ghost of Chucky

If Jordan Jefferson's going to play the way he has the last two weeks, this team might very well be more balanced than Greg "Hope To Rise To The Level of Game Manager Again Someday" McElroy's Tide.--War Blog Eagle

The showdown with 'Bama draws near. The Tigers are not out of the running for a national title if they win.--Garnet and Black Attack

Coach Kiffin credited the Vols win to both the play of his team and the protection spell conjured by his coalition of elves, faeries and leprechauns to offset the "magical flags" of the SEC Overlords.--Orange and Blue Hue

If you count moral victories, the Vols are 4-1 in conference play. That's gotta be worth something.--Get the Picture

The defense remains top-notch despite a barrage of injuries, even Crompton is looking good ... has Kiffykins righted this ship a whole lot more quickly than any of us predicted?--Hey Jenny Slater

Jevan Snead was just what the doctor ordered for these guys.  Furman this week doesn't hurt, either.--Get the Picture

The Tigers are back after a few weeks forgetting how to play football.--Leftover Hot Dog

Got a big game by the offense when they most desperately needed one. Looks like the Chizik/Malzahn doubters who've burst forth from the woodwork may have to keep quiet for another couple weeks.--Hey Jenny Slater

I'd pay cash money to get these guys in November just once so we could cruise to an easy win, too. The Palmetto State Parachutists begin their annual descent. The Navy Seals don't drop with this kind of clockwork.--Dawg Sports

Arguably the most disappointing team of 2009, though not all their fault. Pundits and pollsters should have known better than to bank on Nutt.--Over the Pylon

So if the media overhypes a team and the team fails to meet unrealistic expectations, are they truly a disappointment?--Rocky Top Talk

I'm done trying to figure them out. Can we just send them their Music City Bowl invite already and be done with it?--Hey Jenny Slater

I'm fine with Richt breaking out the black helmets and pants. My issue is with his decision to sit the starting defense in favor of the cheer squad. Sure those girls are tougher but undisciplined.--Orange and Blue Hue

There's always a team in the SEC in turmoil.  From UT to UGA:  TAG!  YOU'RE IT!--Rocky Top Talk

I never thought I would put Mark Richt and hot seat in the same sentence, but a loss to GT this year and it is a very real possibility.--The ACC & SEC Blog

Yes, it was just Eastern Michigan, but the Hogs hung 63 on the Chippewas Spartans Broncos Wolverines whatever bumbling bunch of Michiganders that was.--Dawg Sports

Beating Eastern Michigan is really no great accomplishment. Even if you do score 60 and run the score up in true Petrino fashion.--Over the Pylon

I think even Willie Martinez would be an upgrade for the defense.--Rocky Top Talk

Anthony Dixon has averaged over 150 yards rushing in his last two games against Florida and Kentucky. Although, 252 of those were against UK.  Do they even play run defense in Lexington?--Orange and Blue Hue

Looking for big things to happen with a bye week off before the Tide comes to Starkvegas. Mullen is moving this team in the right direction. Is Anthony Dixon the best back in the league?--For Whom The Cowbell Tolls

They've got exactly two more SEC wins than I predicted they'd get and need only two more for a bowl. Can anyone say with confidence that MSU isn't going to beat UArk and Ole Miss to finish the season?--Hey Jenny Slater

Again, no one talks about Wildcat football. Rich Brooks traditionally does more with less. However, this year he may have the weakest crop of talent that he's had in a while.--Ghost of Chucky

In their last chance to get people to pay attention to them before basketball starts, they allow 348 yards rushing to Miss State. Well played, sirs.--Alligator Army

Rich Brooks is a good coach, but he is not getting Kentucky into the SEC Championship Game. I wonder how long the timeline is for Joker Phillips' takeover.--The ACC & SEC Blog

At least the Commodores are getting a decent education. That's really the only highlight.--Over the Pylon

The Commodores somehow turned into an offensive juggernaut with no defense against Georgia Tech.--Garnet And Black Attack

For a half, I thought the 'Dores were going to deliver a shocker.  But alas, the Yellowjackets insisted on playing that pesky second half.--A Sea of Blue