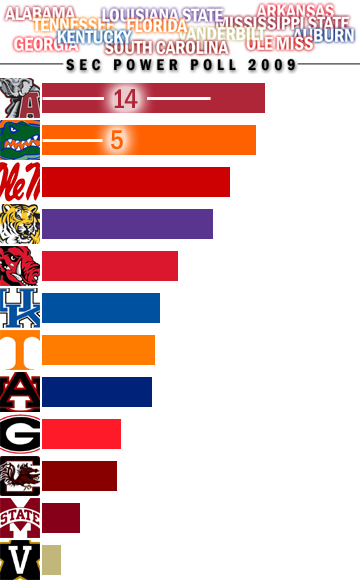 A slight holiday drop-off in voter turnout and a new vote for Florida at No. 1 helps the Gators make up a small bit of ground in the race for first, but it looks like the Tide will take a lead into the SEC Championship Game next week barring an Auburn victory Saturday.

Ole Miss takes over the No. 3 spot by defeating LSU, and Georgia slides four places after the Kentucky upset; Arkansas is now No. 5 and Kentucky goes from 10th to sixth. Tennessee also passes Auburn because -- um, the Vols defeated Vanderbilt and Auburn had a bye? South Carolina also drops on a bye week as a team it defeated earlier this season not only passes it, but ends up four places ahead of the Gamecocks, which is not entirely indefensible given that it's November and this is South Carolina we're talking about.

The biggest difference between Bama 2008 and Bama 2009 is that Mark Ingram is an improvement over Glen Coffee. Through 11 games, Ingram is averaging 127 ypg (5th nationally) with 12 touchdowns.--Alligator Army

Consistency:  If you had a Tide fan start watching one of Alabama's previous games instead of the Iron Bowl, it'd probably take three quarters before they figured it out.--Rocky Top Talk

If you want Alabama to win the MNC, then you don't want Mark Ingram to win the Heisman.  Why?  That Heisman Dining Circuit and the 20 pounds added.--The ACC & SEC Blog

You know Urban, Notre Dame can help you with your post-partem depression...  (I keed.)  ;-)--Rocky Top Talk

LSU is the best team this team has beaten. Think about that.--War Blog Eagle

FIU provided the perfect patsies to work on the passing game. It's like invading Poland before attacking a real army to work out the kinks.--Orange and Blue Hue

The fact that Ole Miss had to sweat while Les Miles bungled an opportunity for the win shouldn't obscure the fact that the Rebels appeared to be the better team for most of the afternoon yesterday.--Garnet And Black Attack

Getting hot at season's end again. Think the Nuttster would like a mulligan on Dexter McCluster's season?--Get the Picture

Even my 13 year-old sister was screaming at Les Miles Saturday night. Granted, I have a sister who chose seeing "The Blind Side" over the Twilight movie last weekend.--Alligator Army

I hope Les Miles realizes that his sideline gesture for "send the FG unit on!" is so similar to what most teams use to signal "spike the ball" as to cause confusion.--Orange and Blue Hue

We have a really witty comment to write here, but time is running ou--Arkansas Expats

They've won four in a row and are scoring in buckets (8th nationally in scoring offense). But three of their four losses were on the road and they will visit LSU on Saturday.--Alligator Army

A win over LSU would send the Razorbacks to Dallas.  Not a bad 2nd year for Bobby Petrino whatsoever.--Red Cup Rebellion

The Hogs average almost 48 points in their wins and 21 in their losses.  A low scoring game against LSU does not bode well.--Orange and Blue Hue

Word of warning to the Vols: If you give Kentucky the ball a lot, they'll, you know, score a lot of points and stuff.--Hey Jenny Slater

Don't look know but the UK football team gave the fans something to talk about during basketball season.--Leftover Hot Dog

Rich Brooks, you are entering some elite company in the pantheon of football coaches in Lexington with road wins at Auburn and Georgia this season.--The ACC & SEC Blog

It's funny that a lot is hinging on the Tennessee vs. Kentucky game, including bowl placement and public perception of both programs.--Red Cup Rebellion

After all of the hoopin' and hollerin' and drama and whatnot, Vols will wind up either the 7-5 or 6-6 team they were supposed to be all along.--War Blog Eagle

Allowed almost 300 yards in offense versus the Nashville Navy.  Even Kentucky didn't do that.--A Sea of Blue

Welcome to your future, Coach Chizik. Friday afternoon determines what your life is going to be like on the Plains, for better or for worse.--Hey Jenny Slater

Auburn needed the bye week the way they need backup linebackers. At least they got one of them.--War Blog Eagle

I think the "character recruits" Tuberville left at Auburn were actual character actors from the Orlando Disney Resorts.--Orange and Blue Hue

Lost to Kentucky, got knocked down to the Weedeater Bowl, David Greene's career wins record got broken, and our dog died. How was YOUR week?--Hey Jenny Slater

So much for that contend for the SEC East title talk.  Right now, the Bulldogs just need to focus on winning breakfast and working from there.--Gate 21

Georgia won every statistical category but two -- turnovers and the final score.--A Sea of Blue

Why is it that they are so terrible late in the season? Is something in the water in Columbia? Are they too focused on their mistress in Argentina?--Alligator Army

Spurrier's best bet against Clemson is trying to convince his team that the bye week was actually the end of the 2009 season and this game is the first of 2010.--Orange and Blue Hue

Would South Carolina actually fire their most successful coach ever if he ends the season with another loss to Clemson and therefore another November swoon?--The ACC & SEC Blog

How on earth does a team rush for 327 yards and lose by three scores?--War Blog Eagle

The Dan Mullen Show is running out of steam late in the season, but I would still be optimistic Bulldog fans because the biggest jump is usually from year one to year two.--The ACC & SEC Blog

Mediocrity may or may not be an attainable aspiration in Starkville.--Dawg Sports

Finally, the season comes mercifully to an end.--Ghost of Chucky

Hey SEC:  you do realize we all just made for a bunch of bitter, resentful future lawyers, right?--Rocky Top Talk