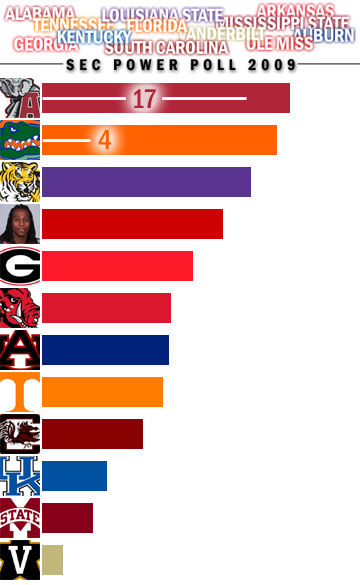 Alabama strengthens its hold on No. 1. Ole Miss, Georgia and Arkansas all move up after losses by Auburn and Tennessee. Kentucky and Mississippi State swap.

I fear for the health of the UT Mocs trying to tackle Mark Ingram and block Terrance Cody this week.--The ACC & SEC Blog

Like the Gators, Alabama gets everyone's best shot. The difference is that Bama knocks out their opponent and UF goes 12 rounds and leaves in the judges' hands.--Alligator Army

After a one week engagement of "Impressive," the Gators have gone back to our regularly scheduled performance, "Merely Effective." Good enough.--Save the Shield

Are they just toying with people at this point? There's a part of me that believes they're going to go through the motions against FIU and Florida State but then rise up and annihilate Bama in the Georgia Dome.--Hey Jenny Slater

Someone already owns firegarycrowton.com. Just sayin'. Not like I checked or anything.--And The Valley Shook

LSU's offense could not offend anybody unless they wore the Confederate flag.--A Sea of Blue

Why is LSU so much better than in 2008? Their defense is only allowing 14 points per game. That's a 10 point improvement over last season.--Alligator Army

Consistency has never been Houston Nutt's strong suit, but when his teams are on they're really on.--Arkansas Expats

Classic Houston Nutt: Wait until the team has clinched a season of profound disappointment, then show up with the SEC's answer to the ‘07 Patriots.--Save the Shield

Dexter McCluster beat Tennessee, not the Rebels. McCluster clocks in at 1-0 for the season.--Over the Pylon

Martinez still needs to go at end of season to please the fanbase.--Leftover Hot Dog

Did the Bulldogs win? These days I only check out Georgia games to see what they're wearing.--Orange and Blue Hue

Plus-two in turnover margin? Only four penalties? The Bulldogs clearly haven't solved all their problems, but they're making tangible progress on a few of them.--Hey Jenny Slater

Quietly the Hogs are having a nice season and the future looks bright with Ryan Mallett running Bobby Petrino's system. --The ACC & SEC Blog

Can a team get a defense on eBay?--And The Valley Shook

After giving up 56 points to both Arkansas and Florida, I think Troy should try and steer clear of SEC teams. There's always the ACC though.--Orange and Blue Hue

The Oldest Rivalry in the South's 2009 edition should have had the subtitle "what's the deal with these teams?"--Red Cup Rebellion

The Tigers are no longer only the most inconsistent team in the conference from game to game; they showed Saturday they can do it from quarter to quarter, too.--Garnet And Black Attack

Don't judge the Plainsmen too harshly for falling in Sanford Stadium last Saturday night after building up a 14-0 lead. Strange things happen in rivalries as storied as this one and even Auburn's likely loss in the Iron Bowl does not change the fact that Gene Chizik's first season has been a success by any reasonable measure.--Dawg Sports

Lane Kiffin assured the media that his team was determined and focused despite recent events. Thank God! Imagine the whoopin we'd have witnessed had they been UNFOCUSED!!!--Orange and Blue Hue

Should put away Vandy and Kentucky like they always do, but if Saturday is any indication of how their banged-up defense is going to perform, neither game will necessarily be the usual cakewalk.--Hey Jenny Slater

Man, do I wish I could wager on things like "'Cocks will end this promising drive to take a fourth-quarter lead in epically bumbling fashion and never threaten again." I'd have a new food processor.--War Blog Eagle

South Carolina fans love Spurrier. Most are NASCAR fans and you won't find any better wrecks this time of year than on the football field in Columbia!--Orange and Blue Hue

‘Cats have more to gain over the final two weeks -- with dates vs. Dawgs and Vols -- than just about any other team in the conference.--War Blog Eagle

Kentucky had four different passers in the first half, and only RB Derrick Locke completed a throw. But alas, when you get to play Vanderbilt this year, it just doesn't matter.--Save the Shield

Even with all the wins over cupcakes, you have to give Rich Brooks credit for winning ball games with his walking wounded.--Garnet And Black Attack

When moral victories outweigh real victories, then you know the state of your program isn't exactly peachy.--Ghost of Chucky

Mullen's squeezed about as much as he can out of this bunch.--Get the Picture

As a head coach of Mississippi State you do a lot of praying. Most of the time the answer is "no."--Orange and Blue Hue

The good news for Vandy is that 09 is almost over. Seriously ... that's the only positive thing.--Over the Pylon

The Music City Sailors languish at the bottom of the conference standings with an 0-7 ledger in league play. Last year's bowl game looks less like a peak and more like a fluke.--Dawg Sports