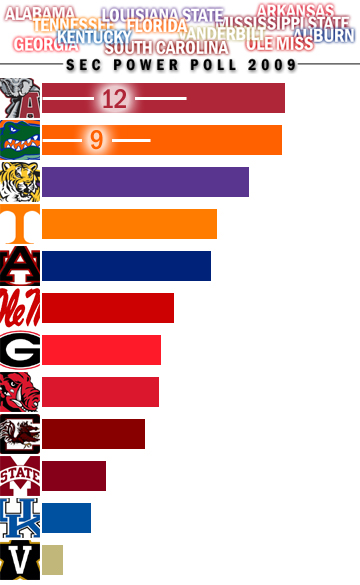 If it's an even-numbered week, that means Alabama must be back in the lead, this time with a three-point and three first-place ballot edge on Florida, which is to be expected when they once again split all the first- and second-place votes in the polls. LSU doesn't lose any ground for a respectable and controversial (is there any other kind in the SEC this year?) loss to Alabama.

The rest of the Top 5 is the same, but South Carolina finally and resoundingly falls out of the top half of the league with its loss to Arkansas. The three-spot drop gives a boost to Ole Miss, Georgia and Arkansas. The Razorbacks, it should be noted, are gaining on the Dawgs.

Everything else is the same, a sign of the late-season stability that often sets in when there are no major upsets. Vanderbilt once again sweeps the last-place votes. All at once: Sorry, Vandy.

Another week, another tough game. This week a new hero rose up to save Alabama's season. This weeks game ball goes to SEC Replay official Gerald Hodges!--Orange and Blue Hue

Before the touchdown catch, Julio Jones was in danger of being on a Tuscaloosa milk carton after his penalty at the goalline.--The ACC & SEC Blog

Bama does not score to get style points. They use violence.--Alligator Army

Florida beat Vanderbilt, but not by as much as I imagined. I am sure that Urban wishes he could complain about that, but Mrs. Meyer needs a new pair of shoes.--Gate 21

I don't care if it is Tim Tebow, you cannot win a championship and allow 22 sacks. Part of the blame is on the offensive line and part is on Tebow for holding the ball.--Alligator Army

Les Miles toes the party line after the loss by not criticizing referees for injuring his staring RB and QB.  Because we all know they did.--The ACC & SEC Blog

Even if Peterson has that pick called, Jarrett Lee wasn't going to win that game.--Red Cup Rebellion

I didn't much care who won that game last week, but I really, really wish they'd called it an interception just so we'd have all been able to go one d--- week talking about actual football.--War Blog Eagle

With Memphis down only Vandy stands between the Vols and TOTAL DOMINATION OF THE STATE OF TENNESSEE!!!  Behold the rise of the Kiffin Empire!--Orange and Blue Hue

All that talkin' Lane did -- well, now he is backin' it up.--Leftover Hot Dog

Furman scored 28 points on AU in the second half ... is that an indictment of the Tigers' defensive depth, or am I really reaching for reasons to have hope for Georgia this weekend?--Hey Jenny Slater

Yes, the Plainsmen gave up 31 points to Furman, but they scored 63 and 28 of the Paladins' points came in the second half, after Auburn had built up a 42-3 halftime lead. Something tells me Saturday night's showdown between the hedges will not feature a scintillating display of rock-ribbed defensive prowess. Oh, goody . . . because high-scoring games against the Tigers in Athens worked out so well for the Bulldogs in 1993, 1995, 1997, 1999, and 2005! (I hate Auburn.)--Dawg Sports

How is it fair that N. Arizona has to play Sacramento State and Ole Miss BACK TO BACK?!?!  The schedule is not doing the Lumberjacks any favors this year.--Orange and Blue Hue

Perhaps more importantly than this year:  if Snead doesn't finish strong, Nutt's going to get a bad rep as a QB killer.--Rocky Top Talk

So what happens when Houston Nutt runs out of Ed Orgeron's players?--The ACC & SEC Blog

UGA's defense managed a shutout over Tennessee Tech. Hard to believe, even if it was against an FCS team.--Garnet And Black Attack

No one noticed the 38-0 shutout of Tennessee Tech because it shouldn't be noticed. But did anyone realize that Georgia is actually second in the SEC East? Talk about a weird mix of reality and standings.--Save the Shield

I never thought I would say ‘Georgia defense' and ‘shutout' in the same sentence for 2009.--The ACC & SEC Blog

Probably clinch bowl eligibility this week against Troy, with a shot at a seventh win against MSU the following week, which would be a big step forward for the program under Petrino.--Hey Jenny Slater

At this point in the season, the Hogs seem capable of an inspiring victory or embarrassing defeat against pretty much anybody. We like to keep it interesting.--Arkansas Expats

If Arkansas played every game at home at 11 a.m., they'd be undefeated.--War Blog Eagle

The Gamecocks have lost 3 of their last four and are on the verge of collapse. That can mean only one thing . . . THANKSGIVING IS ALMOST HERE!!!--Orange and Blue Hue

Do the Bulldogs have a bowl-eligibility run in them?--Garnet And Black Attack

I don't think bowl eligibility is in the cards for the Dogs, but you have to be impressed with the job Mullen's done with the least talented squad in the conference this year.--Get the Picture

It's unfortunate that the NCAA requires a team to win six games to qualify for postseason play, because I'd like to see a bowl game pitting Mississippi State against Connecticut to settle the question of which is the best 4-5 team in America.--Dawg Sports

Struggled with Eastern Kentucky well into the third quarter, but Morgan Newton looks like a solid choice to be the Wildcats' QB of the future.--Hey Jenny Slater

Easy game could not have come at a better time for the traveling M.A.S.H. Unit that is the Kentucky Wildcats.--A Sea of Blue

When does the UK formula for reaching a bowl game start to include beating good teams?--Dawg Sports

Warren Norman and Zac Stacy are a legit threat at tailback for the Dores. Now if they can only fix their problems at WR, TE, LT, LG, C, RG, RT, TE, WR and QB, they might be able to beat a military academy.--Save the Shield

At least with Spikes on the bench, the 'Dores didn't have to wear eye guards.  But it didn't help their offense.--A Sea of Blue