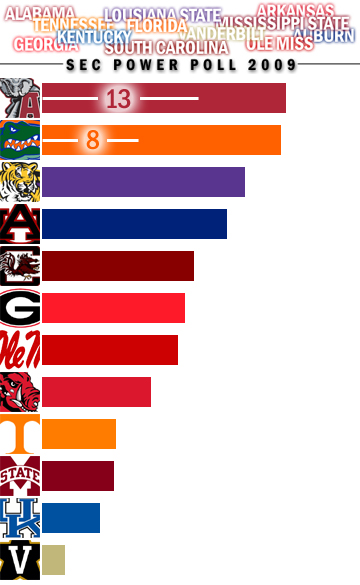 Things getting tighter virtually across the board. Voters, explain.

The Tide showed some chinks in their armor against Kentucky, but they were still generally impressive.--Garnet And Black Attack

By virtue of leaving Lexington concussion-free, the Tide tops the list.--Red Cup Rebellion

The Wildcats scored some mop up TDs against Bama that made it look close, but the Tide remains unchallenged so far. Again, everything Bama does is competent. Nothing spectacular, just solid, consistent football.--Georgia Sports Blog

No clue what they're going to do at LSU, but after the way the Tiger offense continued to slog around against UGA, I'd be tempted to rest Tebow, start Brantley, and let the D take it from there.--Hey Jenny Slater

What did Corch Irvin Meyers do over the bye weekend? Sent "victory blankets" to thus-far flu-free Baton Rouge.--Red Cup Rebellion

Showdown in Death Valley coming up -- will Tebow shake the concussion and Tigers off?--Leftover Hot Dog

Forget the win against UGA, how do LSU fans get the cell numbers of UF players every year? Maybe those crazy Cajun people can talk to the CIA about their skills and we can find some terrorists.--Alligator Army

I am truly flabbergasted the way a quality win has been completely downplayed by nearly everyone. Did I watch a different game?--And The Valley Shook

Monte Kiffin's defense worked as advertised against AU: The Tigers failed to match their 526-yards-per-game average. (They only got 459 yards.)--Hey Jenny Slater

The Tigers lead the SEC with +8 turnover margin. That's why they are undefeated.--Alligator Army

Gus Malzahn's offense is for real and really hard to figure out. It's sort of like a 3 ring circus, and the opponent is the clown.--Gate 21

We have seen this early season charge before out of South Carolina; the question is whether or not they can finish a season strong something they have not done under Spurrier.--The ACC & SEC Blog

The Gamecocks are second in the league with 14 sacks. That dominant defense in Gainesville has half as many.--Alligator Army

Looking over the rest of their respective offensive and defensive seasons, has their been a flukier-looking score this year -- anywhere -- than Georgia 41, South Carolina 37?--War Blog Eagle

Georgia has a right to blame the refs for their loss, but they should also be pointing their fingers at poor kickoff coverage, poor tackling, and an underwhelming offensive gameplan that isn't working.--Garnet And Black Attack

The best two loss team in the country. I guess the voters didn't want 7 SEC teams in the top 25.--Hog Database

Saturday's game in Knoxville is as big a game as UGA will play this year. Win it and there is hope for continued relevance. Lose it and the season starts heading toward a patented Fulmer Year of Death.  A.J. Green still looked like himself against Patrick Peterson and the LSU secondary. Monte and Eric Berry await their chance to slow him down.--Georgia Sports Blog

Jevan Snead had better show up real soon if the Rebels want to salvage this season.--Get the Picture

Why do I get the feeling that after watching the Rebels splortch around for five weeks, ‘Bama is in for a total dogfight on Saturday? Oh, Houston Nutt's entire career, that's why I get that feeling.--War Blog Eagle

Clearly, leaving the Southwest Conference was a bad call.--Dawg Sports

The Hogs were outgained by Texas A&M, but still engineered a rout. That means Bobby Petrino has, in this season alone, been out-manned offensively by Joe Cox and Mike Sherman.--Red Cup Rebellion

Here's to hoping the scoreboard operator in Fayetteville has done all necessary checks, maintenance, tests, etc. before Saturday.--War Blog Eagle

This team has a great defense and a mediocre offense. So other than being in the news all the time what is the difference between Kiffin and Fulmer again?--Garnet And Black Attack

The Kiffin Express has taken America by storm like a Sarah Palin special hosted by Jerry Springer and featuring a Montel Williams maternity test segment. It's awful, but you can't look away. --Save the Shield

Attention Vol fans: Fulmer didn't leave you with Crompton. Fulmer handed both B.J. Coleman and Tajh Boyd, and Kiffin looked at both and said, "No thanks."--War Blog Eagle

When was the last time a team lost without punting the ball? Bulldogs problem against Georgia Tech wasn't blocking and tackling (well maybe some tackling), it was holding on to the ball.--The ACC & SEC Blog

They're better than the NCAA average, which is miles beyond the last few years. Welcome to the SEC!--Rocky Top Talk

Opening the SEC season with Florida and Alabama is like opening a one-on-one basketball tournament against Kobe and Lebron. What did you expect to happen?--Orange and Blue Hue

Things have cooled since the hopeful start. That Louisville win may have been more a function of Kragthorpe than Kentucky.--Rocky Top Talk

On the bright side, Mike Hartline is only the third worst QB in the SEC.  Of course, he's also only the second best QB in Kentucky's starting lineup.--Save the Shield

Vandy is like a huge rack of ribs: You know you're going to devour them but you never look good doing so, and there's a good chance you're going to feel lousy afterward.--Hey Jenny Slater

Nothing to see here; keep moving along. Hidden behind the crime scene tape cordoning off the bloodbath that is VU passing game statistics are a solid defense and a somewhat underrated running game.--Save the Shield

Forget about a bowl game. Will these guys win an SEC game this season?--Get the Picture