SEC Leads the Way In Unbeatens

Share All sharing options for: SEC Leads the Way In Unbeatens

Last week, I took a look at the number of undefeated teams left and how much lower the number was than in 2007 and 2008. There were just 17 undefeated teams left, and four of them lost over last weekend. That leaves just 13 unbeaten teams this season: Alabama, Auburn, Boise State, Cincinnati, Florida, Iowa, Kansas, LSU, Missouri, USF, TCU, Texas, and Wisconsin.

I could just do a table to sort those by conference, but why do that when a pie chart will do? 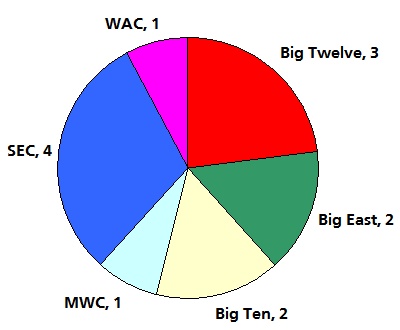 I can use Excel!

But wait! What's that I hear? It's a chorus of voices coming from the rest of the country shouting "SEC teams play bad schedules! SEC teams don't play anyone!" Don't worry, I've got you covered. I went through all the undefeated teams and looked at how many teams from Big Six conferences they've played. The results may surprise you if you're one of the ones shouting those mantras.

It's of dubious value to be the best league during a down year for the sport, but when you combine this sort of data with the fact that the SEC has the best non-conference record so far, it makes the conference look pretty good. I'll leave it up to someone else to go fight the conference wars, but it's an encouraging sign since the SEC was down last year. Things are looking up, and this is just one of the reasons why.