Trick or Treat: What Do We Make of the New Jonathan Crompton?

Share All sharing options for: Trick or Treat: What Do We Make of the New Jonathan Crompton?

I don't see how you can still call Crompton a bad QB, not after the last couple of games. ...

It takes a long time to live down a reputation for playing poorly, but Crompton's performances against Alabama and Georgia are a terrific start.--Joel, Rocky Top Talk

I think [Crompton is] increasing his draft value by the way he's playing. He's making himself some money. How he'll play down the stretch will have a lot to do with how he's picked.--Lane Kiffin

Yes, but surely these are just the delusions of Tennessee fans and the rather large mouth of Boy Wonder. We can't take seriously the idea of Jonathan Crompton as a good quarterback. After all, the Alabama game is just one game. Certainly, if we look at other games as well, Crompton isn't doing that well.

If those are your thoughts upon hearing that some people think Jonathan Crompton might have revitalized his career, you might be in for a bit of a surprise. This is Crompton's record over the last two seasons -- and things are definitely looking up. 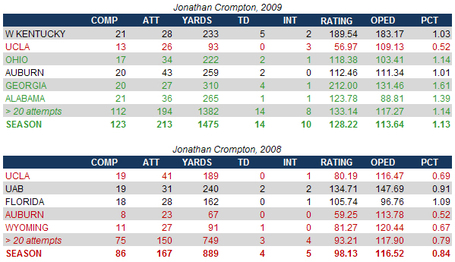 There are a lot of numbers in that chart, but let's get to what they basicall mean. The first six rows should be pretty self-explanatory. The seventh is "opponent's pass efficiency defense" in the given year and "PCT" is what I'm calling "pass efficiency percentage"; think of it as a batting average weighted for the quality of opposition. It's a first draft of the stat, and I'd welcome any advice on tweaking it, but the idea right now is to express in some statistical form a quarterback's performance in relation to a particular opponent. Basically, it's the percentage of an opponents pass efficiency defense rating that is represented by the quarterback's pass efficiency rating. So Crompton's rating in the 2009 game against UCLA is about 52 percent of the rating all quarterbacks (including Crompton) have put together against the Bruins; his score for the 2008 Florida game is about 109 percent of the combined rating for all quarterbacks who faced the Gators last year.

But let's look at things another way. Let's isolate Crompton's five best performances this year by passer rating and compare them to -- well, his only five games with more than 20 attempts last year.

Not once does a game with a PEPCT of less than 1.00 show up on the chart for this year, while all but one of last year's games have a PEPCT of less than 1.00. (Only one of those even cracks 0.70.) I also added a place in the chart for the ranking of the opponent's pass efficiency defense to provide a little additional context. Some of the numbers for 2009 not only aren't terrible, they're very good. Crompton performed 39 percent better against the second-best pass efficiency defense in the country this year and 61 percent better against Georgia. (Sorry, Georgia.)

So what does this tell us about Crompton? We can't say precisely how good he is, but we know he's probably better than average this year; obviously, if you averaged out all the quarterback performances in the country with all the pass efficiency defenses in the country, you would come up with a PEPCT of 1.00. What this is lacking -- and what I hope to be able to give you some time in the not-too-distant future -- is context about how Crompton compares to a quarterback like Boise's Kellen Moore (No. 1 rating in NCAA) or Tim Tebow (No. 1 rating in SEC).

But it's not completely ridiculous to think that Jonathan Crompton isn't just better than last year; he's better than a lot of people believe.