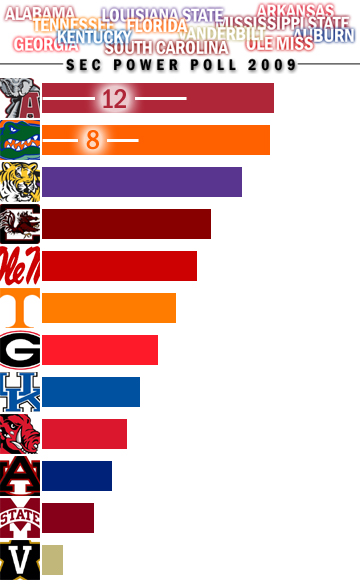 The top four is unchanged. Alabama's lead is back down to four points over Florida, all of it based on the Tide's edge in first-place votes; no other team received a first- or second-place vote from any of our poll members. LSU sweeps the third-place ballots to cemet itself as the fallback option if one of the front-runners loses.

Ole Miss is back in the Top 5, where many of us expected them to be nationally when the season began, and Tennessee cracks the top half of the poll after just losing to Alabama. Arkansas is the week's largest drop, going from 5th to 9th after the loss to the Rebels. The last three places are also steady.

Note the emergence of a little bit more separation in the middle of the poll. It's not much -- most of our voters still seem to be splitting hairs in some of these places -- but it's enough to give the results a sort of shape before this week's results obliterate our analysis.

Forget Ingram for Heisman, how about Terrance Cody for Heisman! He would have no problem with that dinner circuit. But seriously, Alabama has to find a passing game to win the national title.--The ACC & SEC Blog

Imagine if they had a passing attack to go along with a great running back and a very good defense.--Leftover Hot Dog

Can we all take a moment to thanks Terrence Cody? If he doesn't block that kick we A) have to put up with UT fans at a level of unsufferability last seen when Peyton was conducting Rocky Top and B) don't get the undefeated SEC title matchup the refs have worked so hard for.--Save the Shield

All due respect for one of the game's great players, but: if Tim Tebow deserves this year's Heisman, I deserve the chancellorship of Prussia.--War Blog Eagle

Tebow provided 13 of Miss State's 19 pts on interceptions returned for TDs. That means that just having Tebow on the field more than TRIPLED MSU's point production for Tim's former mentor Dan Mullen.--Orange and Blue Hue

If this power poll included the officials, they'd be No. 1 by a wide margin. Another week, another helping hand.--Over the Pylon

Finally came out with an overwhelming performance. Could they be heating up at just the right time?--Garnet And Black Attack

They are still in the SEC West race and running the table could put them in Pasadena, instead of Bama or Florida. That is all you can ask for from your team; a chance to win it all.--Alligator Army

That LSU is the SEC's third best is not in doubt.  What is more uncertain is if they're closer to Alabama and Florida or the pack.--Save the Shield

They're right on pace to be, well, exactly where they've always been for this century.--Rocky Top Talk

Yes, they have been winning, but they have struggled with Kentucky and Vandy.  We know how this ends, right?--And The Valley Shook

I'm still trying to figure out how the Gamecocks could have 431 total yards and no turnovers and still only beat Vandy 14-10.--Hey Jenny Slater

Jevan Snead, is that you? We have been looking for you in Dallas since last January.--The ACC & SEC Blog

Wow, who had any idea that giving the ball to Dexter McCluster 25+ times would be a good idea? Inconceivable! No one could have seen it coming! Talk about success coming completely out of left field!--War Blog Eagle

Not at all unexpectedly, Houston Nutt had his team ready to play against the Hogs.--Arkansas Expats

UT scored a total of 23 points in losses to Alabama and Florida. They beat Georgia convincingly and lost to UCLA. Excuse me if I'm not seeing a huge improvement over the last three years of Fulmer.--Get the Picture

Say hello to the most enigmatic team this side of Oxford.--Red Cup Rebellion

The box score doesn't lie: Crompton was 21-of-36 for 265 yards, one TD, and one pick against Alabama. Which means UT's surge over the last couple weeks may not be a fluke.--Hey Jenny Slater

It's not over yet for them, but they're on a precipice.  Losing to Florida is a given, but what about Auburn?--Rocky Top Talk

My preview of the Cocktail Party -- someone tell LSUFreek -- would just be a fark of A.J. Green in one of those martial arts movies where one ninja takes on 30 dudes singlehandedly.--War Blog Eagle

Battle tested and may end up 9-3.  Probably the best team no one talks about.--Hog Database

Arkansas plays about as well against Houston Nutt as they did for him.  After lighting up Texas A&M and Auburn the Hogs have proven beyond a doubt that the top SEC defenses can keep Mallett in check.--Orange and Blue Hue

It seems that Arkansas' glaring weakness has been exposed: they don't play defense.  As Ole Miss showed, if you press them, the 'Backs also really don't play offense either.--Gate 21

The bandwagon is looking frighteningly empty. --And The Valley Shook

The wheels have seriously come off the Chizik train. The Tigers may vie with 2007 South Carolina for the worst finish in SEC history.--Garnet and Black Attack

Ok, now that teams are beginning to figure out the Mal-fense, and now that Todd isn't making consistently miraculous passes, it's time for the adjustment.  That's how we'll know if this deal is legit.--Rocky Top Talk

Hey, did anybody notice that Paul Rhodes has already matched Chizik's career win total at Iowa State?--Get the Picture

Dan Mullen has put together the best 3-5 team in America. That always sounds like a much better compliment in my head than it looks like it is when I write it down ... --Dawg Sports

Coach Dan Mullen has been publicly hammering the replay referee for losing the game for the Bulldogs. I still don't understand why he let the ref call that fake punt in the first place.--Orange and Blue Hue

If they finish their season 3-1, that's six wins and a bowl game. After the way they played against Florida, asking Miss State to get to six wins is not a stretch.--Alligator Army

If you watched the Vandy-South Carolina game, it was a microcosm of Commodore football over the last 20 years -- close counts in horseshoes and hand grenades, not SEC Football.--The ACC & SEC Blog

Vanderbilt is the Vanderbilt of the SEC.--Dawg Sports

Here's a question for you brainiacs: how does a team with the lead lose when their halfback is averaging 5.5 yards per carry?--Red Cup Rebellion