Fair warning. Usually, reprimands for criticizing the officials are fairly bland and feature the same basic statement, as was done in the case of Dan Mullen.

"Coach Mullen has violated the Southeastern Conference Code of Ethics," Slive said. "SEC Bylaw 10.5.4 clearly states that coaches, players and support personnel shall refrain from all public criticism of officials."

Then there was the statement about Lane Kiffin.

"Coach Kiffin has violated the Southeastern Conference Code of Ethics," Slive said. "SEC Bylaw 10.5.4 clearly states that coaches, players and support personnel shall refrain from all public criticism of officials."

"This is the second reprimand for Coach Kiffin in this calendar year. Coach Kiffin is on notice that for any further violations of SEC policies will subject him to additional penalties including suspension." 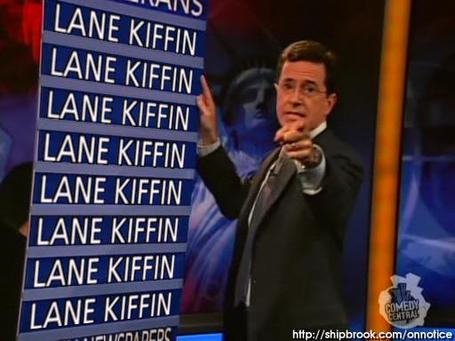 That was less than subtle.

SEC sorta stands by the Florida call
This would be the Dustin Doe "touchdown" that pretty clearly looks bogus on the replay. Here's what I saw on the replay during the game: Doe's hand goes backward holding the ball, then goes forward and over the goal line but no longer holding the ball. The league is being tight-lipped on this in the seeming hope that it will just go away.

Gators say it's 'real close'
Though it's mostly in jest.

A better view might have helped some
And Groo asks a very good question: Why didn't we have one?

RBR takes on the Mt. Cody helmet question
To summarize: The penalty would have been assessed on the next play and not on Tennessee's kick, so the game was still over. But the details are more than worth the read.

Subtlety was never his strongest suit
Where Boy Wonder insinuated a conspiracy, Ed Orgeron went ahead and said it.

"Seems like some people get the calls and some people don't," Orgeron said while speaking to the Knoxville Quarterback Club on Monday. "I've been in this league and I've been a part of that. Whether that's true or not, you can never prove that.

It's also apparently part of an anti-Boy Wonder plot. The paranoid fringe appears to have completely taken over in Knoxville.

Bobby Johnson next?
This is never going to end, is it? Now it's Bobby Johnson raising concerns about a South Carolina TD that even some Gamecocks fans have said was questionable.

"I'm not saying anybody's doing anything subversive or anything like that, (but) in my opinion (Moore's) foot clearly was on the line after he bobbled the ball. After he had possession, his left foot was in the air, his right foot was on the line," Johnson said.

"I don't know what kind of evidence you need for those overrules. But to me, that was fairly clear."

Shy of calling for the official's head, Johnson pretty much said everything that Dan Mullen did. It will be interesting to see if the league treats Vanderbilt's coach the same.

Shocking news
Urban Meyer appears to suggest that he might have intentionally called those timeouts at the end of last year's Georgia win. No!

Meyer was asked about his decision to call time out in last year's win against Georgia, even though the outcome was clear at the end of the 49-10 win, so Emmanuel Moody could get some carries. Was it really just to prolong the Bulldogs' pain?

Meyer grinned and responded: "The biggest issue is going to be stopping this receiver ...''

Not that there was ever really much doubt about that in Athens
Georgia players seem to have some passing memory of that incident.

"That's motivation for me when he called that timeout," Georgia receiver A.J. Green said. "That's a sign of disrespect. I'm going to go out there and play my heart out."

There better be some sort of shot at the losing team in this game. It's free material every year.

Florida is still trying to draw on the incident that caused the timeouts
Yes, the riot of 2007 apparently hasn't lost its power to motivate.

And Florida is still fired up about Georgia's 2007 end-zone celebration. DT Terron Sanders calls it a "sign of disrespect," among other things, after Georgia "stormed the field."

"We feel as if it’s a slap in the face," Sanders said. "We can’t just let it be a one-year thing where we feel like we took care of it. We always have to look back at it as disrespect." ...

There's a good chance Gators players will see the video of the celebration throughout the football offices, courtesy of strength and conditioning coach Mickey Marotti.

Could everybody eventually get emotionally burned out by this motivation and countermotivation?

Alligator Army calls Tebow 'lazy'
And then says many more things after that.

At this point, Tim Wakefield has a quicker release than Tebow. There is no excuse for this. In his fourth year, he should be committed to doing things the right way, not his way.

Don't worry; AA also rips Addazio and pretty much everyone else who has anything to do with the offense.

Even Meyer is mildly critical
He calls it Tebow "not playing at his highest level."

And the guy running Tim Teblog is turning on him
Dan Shanoff writing at the Doc's place:

I appreciate that Tebow was likely frustrated to no end about his performance, and the performance of the offense, in general. But, as with press conference following the Ole Miss game a year ago, Tebow owed it to the team, the fans and the media to talk about the game. Even if he didn't want to.

Shanoff plays this smarter than most reporters do. The issue isn't so much that Tebow didn't talk to the media itself, but that he didn't give the reporters comments that could then be communicated to their readers.

Where have we heard that one before?
"As Jevan Snead's numbers rise, so do the Rebels," says Brandt.

And now there's a proposed blackout at ... Kentucky?
So you no longer even have to have black in your color scheme to pull this stunt. Someone please stop the madness.

"They didn't come any better than Jazz'
Jasper Howard's funeral was held Monday in Miami.

Yeah, that Michigan story about practice time was total nonsense
What's that?

The NCAA's enforcement staff often looks into allegations, according to Osburn, but only sends school presidents a letter of inquiry when an initial review determines a violation may have occurred based on credible information.

ESPN suspends Griese
No word on whether he'll eat a taco during the game he misses.