Kiffin Reprimanded, but the Announcement is a Bit Overboard, No?

Share All sharing options for: Kiffin Reprimanded, but the Announcement is a Bit Overboard, No?

So Lane Kiffin got a reprimand from the SEC for criticizing the refs after the Tennessee-Alabama game. We knew this was coming. Bobby Petrino got one last week for much less. Did it really deserve this on the SEC's official website? 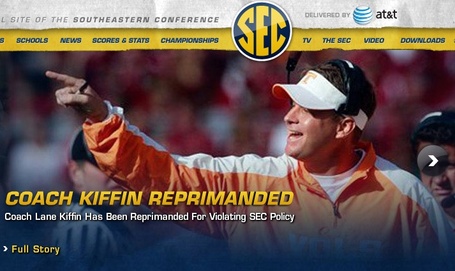 I get that they're trying to go the fancy design route with large pictures because that's what the kids like these days. However, the choice of picture and the fact that the conference chose to make this a major headline along with things like game highlights and a selection of the plays of the week makes it look like someone in the league office has it out for the man. I will say this though: I like the scowling visage of Ed Orgeron behind him on the right. It's like a fun little Easter egg.

I can't blame Kiffin for being upset that Alabama got only one flag while his team got eight, especially given that Tennessee is the least penalized team in the conference this year. I don't buy his comments about trying to avoid "magical flags" causing him to play it conservatively at the end of the game though. He played it conservative the whole game. There's no reason to think he wouldn't have continued to do so at the end. He's also wrong about saying that a reprimand letter "really means nothing" because once you get three of them in a calendar year, the league can fine or suspend you.

Notably missing from the site is a press release announcing the reprimand for Dan Mullen criticizing the officials. I mean, it is coming, right? He complained just as vehemently (though without the insinuation of a conspiracy) after his game.

Here's Mullen's announcement, but the graphics department gives him the Wilson from Home Improvement treatment. 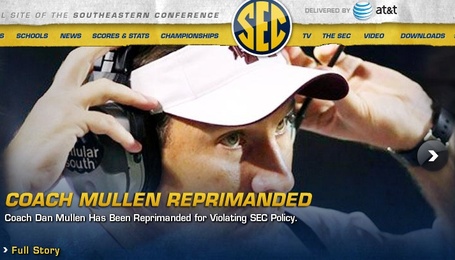